What is a Diffuse Intrinsic Pontine Glioma (DIPG)?

Like other tumors that arise in midline structures of the brain, most DIPGs are histone H3-mutated tumors that harbor H3K27M mutations. DIPG typically originates in the ventral pons, which is the largest part of the brainstem, thereby making this tumor an extensive malignancy of this area of the brain.

The highly aggressive nature of DIPGs often causes these tumors to occupy critical pathways and nuclei, in addition to infiltrating other regions of the brainstem without causing much mass effect. As a result of their diffuse nature, DIPG tumors have a reputation of being ‘untouchable.’

DIPGs often cause the anatomic structures located at or near the ventral pons to become dysfunctional as a result of compression of the tumor.

Abducens palsy, which is the term used to describe the dysfunction of cranial nerve VI, by DIPGs, for example, will often cause dysconjugate gaze, which prevents the eyes from turning together in the same direction, and ultimately leads to a condition known as diplopia, in which the affected individual sees two images for each singular object.

Comparatively, damage by DIPG tumors on the motor tracts that pass through the pons can cause the patient to experience weakness in their extremities, hyperreflexia and a positive Babinski sign during neurological exams. When the adjacent cerebellum is affected by DIPG tumors, the patient may experience ataxia, or impairments in their gait; dysmetria, which causes their coordination skills to be altered; or dysarthria, which is a change in speech.

The ‘classic triad’ of DIPG arises when each of these areas of the brain are affected, and typically affects most DIPG patients. Taken together, the classic triad symptoms will include motor weakness, cranial neuropathies and other symptoms of cerebellum dysfunction. In very young children, abducens palsy is considered to be a sensitive predictor of DIPG.

The diagnosis of DIPG is typically achieved through obtaining a patient’s history, neurological exam and brain imaging, which would typically include a computerized tomography (CT) of the head without contrast followed by a magnetic resonance imaging (MRI) scan with and without contrast.

Clinicians historically do not obtain a biopsy of the tumor unless they are interested in potentially identifying a pharmacologic target by tissue analysis, as neuroimaging is sufficient for an accurate diagnosis of DIPG. 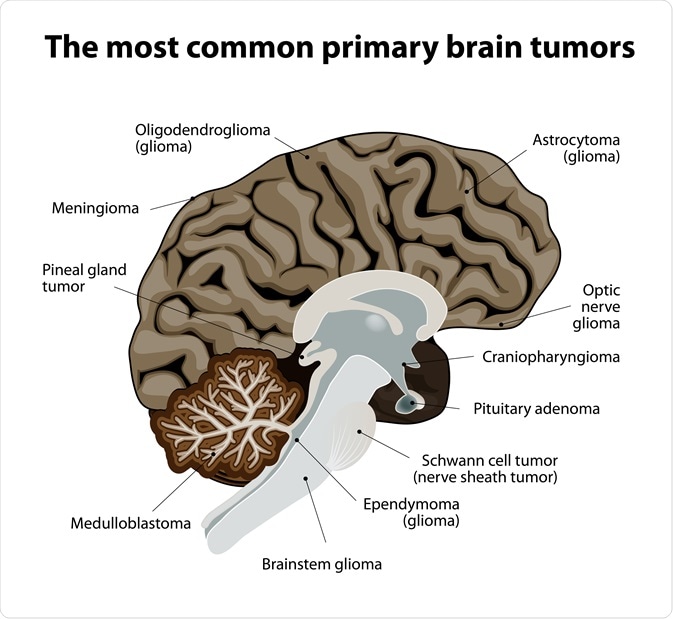 Types of brain tumors categorized by where the tumor begins. DIPG is a type of brainstem glioma. Image Credit: Designua / Shutterstock.com

DIPG grows diffusively within critical brainstem structures, thereby eliminating the potential for surgical resection of these tumors. An additional challenge in the treatment of DIPG is that the blood-brain barrier (BBB) often limits the efficacy of chemotherapeutic regimens in the treatment of DIPG, which has therefore caused radiation therapy to remain the mainstay of treatment.

The limited efficacy of radiotherapy and chemotherapy in the treatment of DIPG has led clinicians and research scientists to investigate alternative approaches to the treatment of DIPG. Convection Enhanced Delivery (CED), for example, which involves the placement of a catheter directly into the region of the tumor through stereotactic surgery for localized drug delivery of chemotherapeutic agents, has been proposed.

This approach bypasses the BBB in an effort to overcome the traditional challenges associated with chemotherapy for the treatment of DIPG and other pontine brain tumors.

Currently, an ongoing phase I clinical trial being conducted at several hospitals within the United States. One of these includes Memorial Sloan Kettering Cancer Center in New York, which has found that the use of CED in treating children with DIPG has increased patient survival rate to over three years post-treatment, with a median overall survival of 17.5 months.