During the 2022 Homecoming week at West Holt Public Schools, the elementary, junior high, and high school students participated in “Change Wars”, a competition between classes to raise funds for the Team Jack Foundation. Led by the Student Council, the students collected coins to put in their respective donation jars. To create a bit more competition, classes had the option to add bills to other classes’ collection jars, which were deducted from their total but still raised funds for the cause.

At the end of the week, $902.38 was raised in total for childhood brain cancer research. Mrs. Roemer’s Kindergarten class had collected the most out of the kindergarten through 6th grade classes and the Freshman class won the junior high and high school competition.

Team Jack Executive Director, Kylie Dockter said, “The continued involvement from West Holt Public Schools’ students, faculty, and administration means so much to us! Our hometown has been an integral part of our fundraising efforts since our 2013 inception, and we are grateful for the continued support.”

On Friday, September 23 the Team Jack Foundation treated the winning classes and the student council to donuts and orange juice. The Change Wars competition was a great way to raise awareness and research funds during 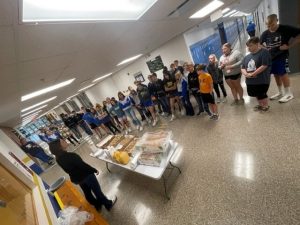