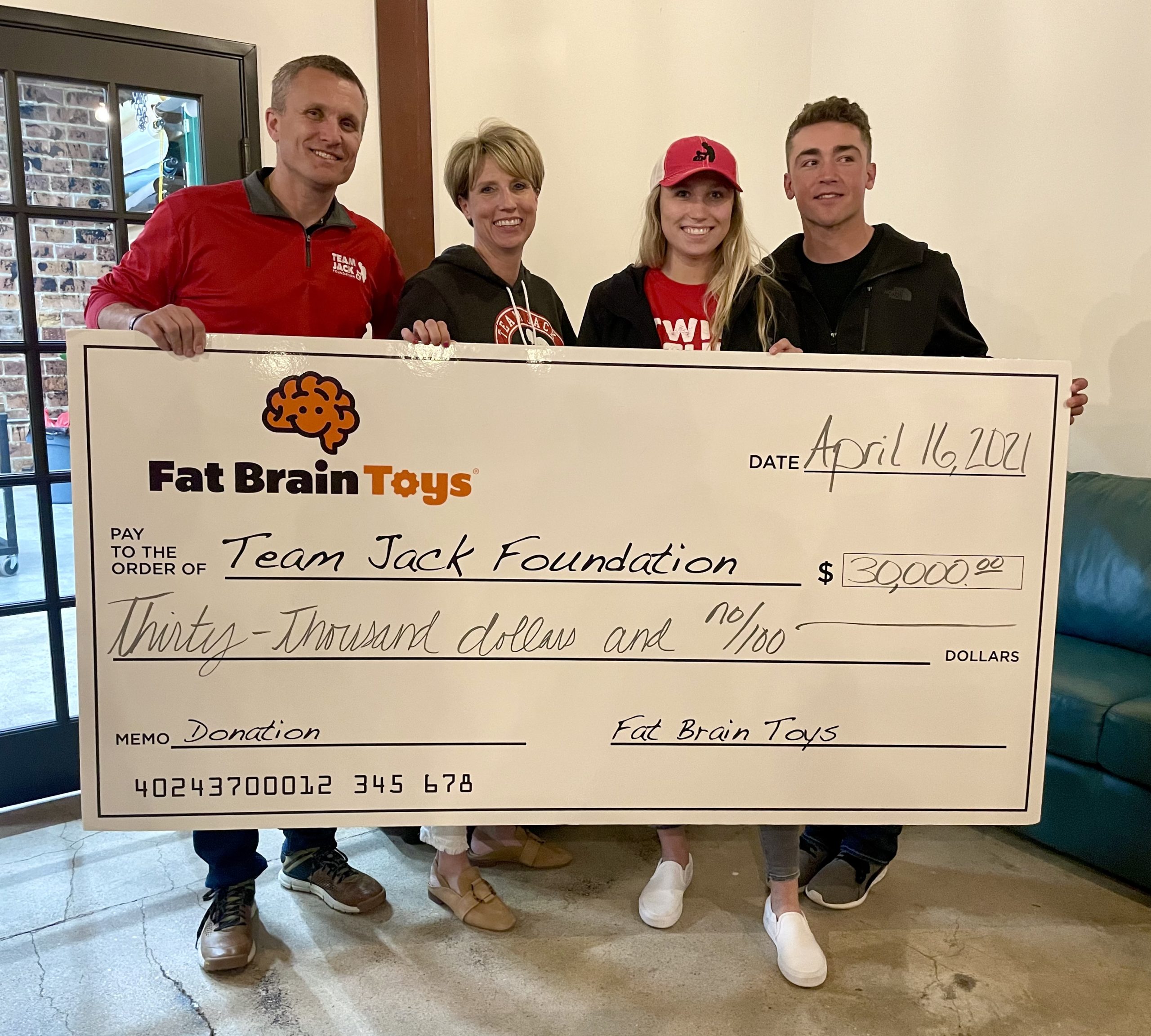 On April 16, the Team Jack Foundation gathered sponsors, special guests, friends and more, virtually, for their 8th Annual Gala which raised $482,000 for their cause: childhood brain cancer research.

Presented by Fat Brain Toys, the gala had a special look this year due to the Covid-19 pandemic, yet, supporters were still dedicated to raising money for childhood brain cancer, the leading cancer cause of death among children.  Fat Brain Toys has been the presenting sponsor of the Gala since 2017. In addition to their sponsorship, Fat Brain Toys asks their customers to round up for Team Jack at checkout. The 2020 Round Up for Team Jack Campaign totaled $36,600 making the five-year Round Up total $113,000.

The 8th Annual Gala was the Foundation’s first event since the passing of Team Jack Founder, Andy Hoffman, on March 1, 2021.  Andy was diagnosed with a brain tumor, glioblastoma, in July 2020.  Throughout his own diagnosis, Andy still made raising awareness and funds for childhood brain cancer research a priority.

The narrative of the gala this year followed Andy’s book, Yards After Contact, which was released in October 2020, just months before Andy passed from the disease himself. The event was presented as a one-hour special which aired on News Channel Nebraska and MeTV on Friday, April 16, at 7:00 PM. While the virtual gala still included the annual traditions of each year’s event including a silent and live auction, the format followed the chapters of Hoffman’s book.  The beginning of the program featured interviews from Keith Zimmer, Associate AD, Nebraska Athletics and Rex Burkhead, former Husker, New England Patriot Running Back and Team Jack Board Member.

The program also featured interviews from Mike Flood, Founder of Flood Communications, and Mike and Jacky Hoffman, Andy’s brother and sister-in-law.  Both discussed the first, licensed Nebraska Husker t-shirt that raised nearly $275,000 for child brain cancer research and launched the creation of the Foundation in 2013.

Each year, the Foundation selects one family who has been affected by the disease to share their story. This year, the Spotlight Story presented by Jim and Sharri Baldonado Family and The Home Agency featured Cole Christensen, from Lincoln, Nebr. 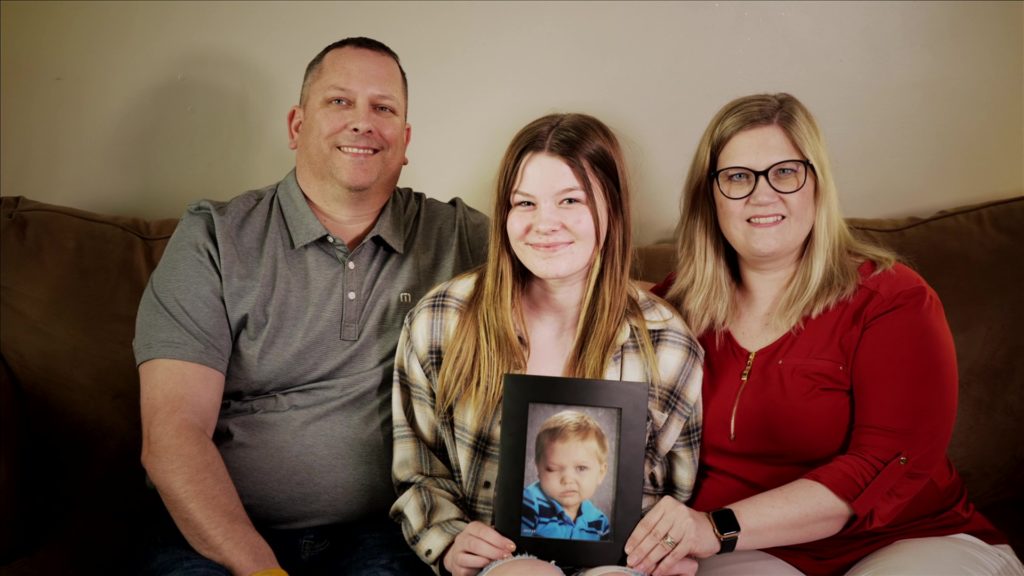 Chris, Lexi, & Amy Christensen holding a photo of Cole who passed away from brain cancer at age three.

Cole was just 15-months old when he was diagnosed with a brain tumor. Because of the lack of treatment options for Cole’s type of tumor, his parents Chris and Amy Christensen were required to follow the ages old protocol of surgery, radiation and then wait and watch for tumor regrowth.  The tumor continued to regrow, and Cole’s parents made the toughest decision of their lives, to stop treatment.

“We didn’t want to make him suffer just so we could have him longer.” – Chris Christensen

Cole passed away on December 18, 2012 after his valiant fight.

“The unacceptable reality is that children right here in Nebraska and nationwide continue to be diagnosed with brain cancer and continue to have few treatment options. This is not acceptable and that is why we choose to continue to support this event and the Foundation,” said Jim Baldonado, President of The Home Agency.

Following the spotlight story, the program featured nearly 75 more children who are currently fighting, are in remission or who have lost their battle to the disease and took a moment to honor each of those children. 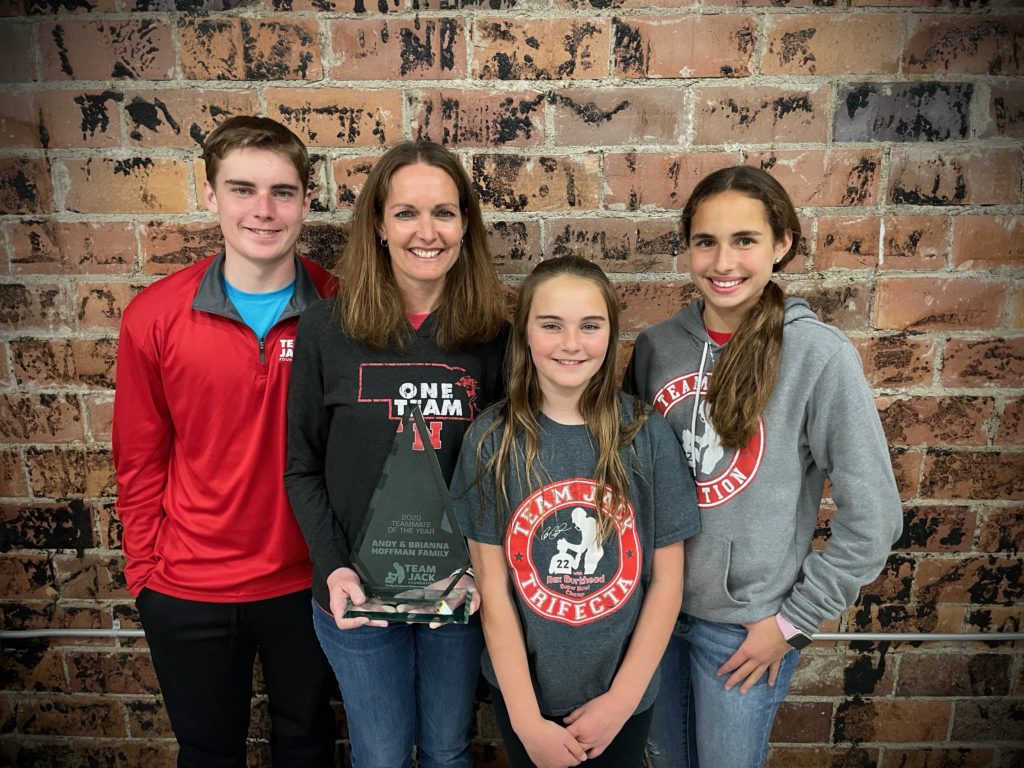 Jack, Bri, Reese and Ava Hoffman with the 2020 Teammate of the Year Award trophy presented to them and the late Andy Hoffman for their work to defeat child brain cancer.

The program ended with the annual tradition of the Teammate of the Year Award presentation.  This award is given out to an individual(s) in recognition of their commitment to the Foundation’s mission.  Mark and Karen Carson, Founders of Fat Brain Toys and the annual gala presenting sponsor, presented this year’s award to the Brianna Hoffman Family and the late Andy Hoffman..

With the support of donors, supporters, and friends of Team Jack, the gala achieved a record year, raising $482,000 for research.  In addition to the traditional elements of the gala, this year the Foundation sold raffle tickets to win a restored 1980 Trans Am donated by Mark & Mari Burch and Burch Motorsports of Lincoln, NE. Over 1,100 raffle tickets were purchased, and the lucky winner was William Richardson from North Platte, Nebraska. This was an exciting way for the Foundation to bridge the gap left by not being able to hold an in-person event.

The virtual program followed the narrative of Andy’s book, Yards After Contact, but also focused on the passion of one family and their quest to change the fight against child brain cancer.  The battle to end childhood brain cancer is grossly underfunded, but the Hoffman’s have shown that perseverance and determination can start a movement.  The mission of Team Jack is stronger than ever.  Since the inception of the Foundation in 2013, over $8.5 million has been raised for research, however, much more needs to be done.

Andy’s wish was that the story of the Team Jack Foundation will someday be part of the final and unwritten chapter:  the cure.  This does not happen without the commitment of individuals and companies like those who supported and continue to support this annual event.  The Foundation will keep fighting until there is a cure.

To learn more or get involved, visit, www.TeamJackFoundation.org.