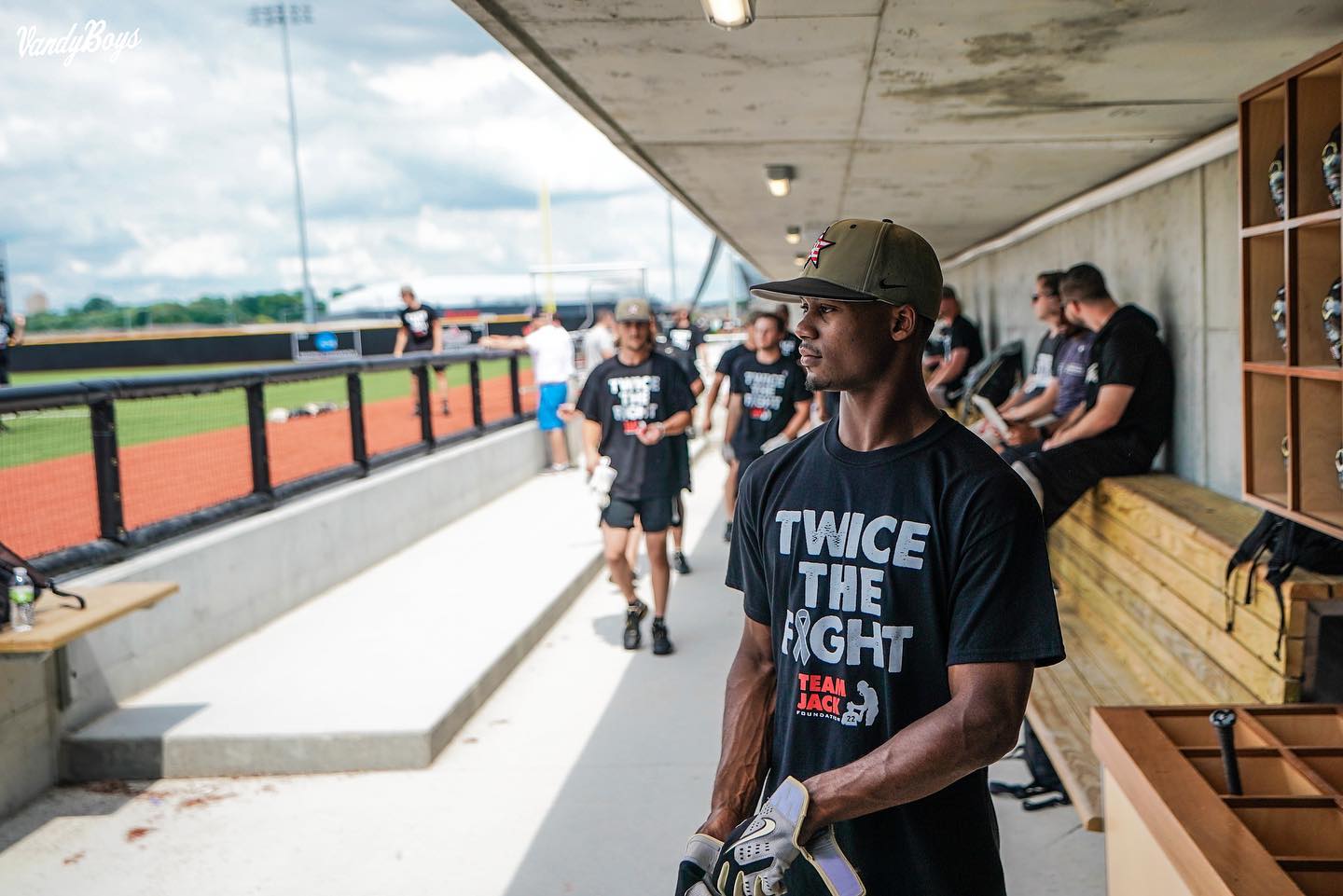 Omaha, Nebr. – The Vanderbilt Commodores baseball team, more commonly known as the “Vandy Boys”, took to Omaha for the 2021 College World Series supporting a household Nebraska non-profit, the Team Jack Foundation. During their Sunday workout on June 20, the day following their first-round CWS victory over Arizona, the team wore Team Jack t-shirts bearing the phrase “TWICE THE FIGHT” as well as matching wristbands. That evening the Vandy Boys posted a video and several pictures of the players wearing the wristbands and shirts and shared across three of their social media platforms to nearly a half a million followers.  The posts read: “Proud to support the @TeamJackFoundation in awareness of pediatric brain cancer.” 2021 Gold Glove Award winner, Enrique Bradfield, Jr., is shown (above) in the dugout during practice wearing the Twice the Fight t-shirt. Vandy ace, Jack Leiter, and homerun hitting third baseman, Jayson Gonzalez and more have continued to wear the Twice the Fight wristbands throughout the week raising additional awareness. 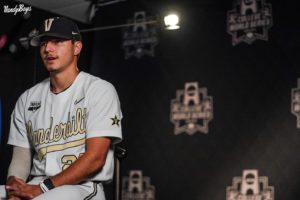 The Twice the Fight phrase began last July when Team Jack co-founder, Andy Hoffman, was diagnosed with a cancerous brain tumor called glioblastoma. This came after Andy tireless advocated for childhood brain cancer research funding and awareness for nearly a decade after his five-year-old son, Jack, was diagnosed in 2011. The Hoffman family was having to fight two brain tumors in their family and had to double down and fight twice as hard. Sadly, after fighting bravely for seven months, Andy passed away in March 2021. Jack continues a clinical trial to battle his brain tumor and recently had a stable scan. 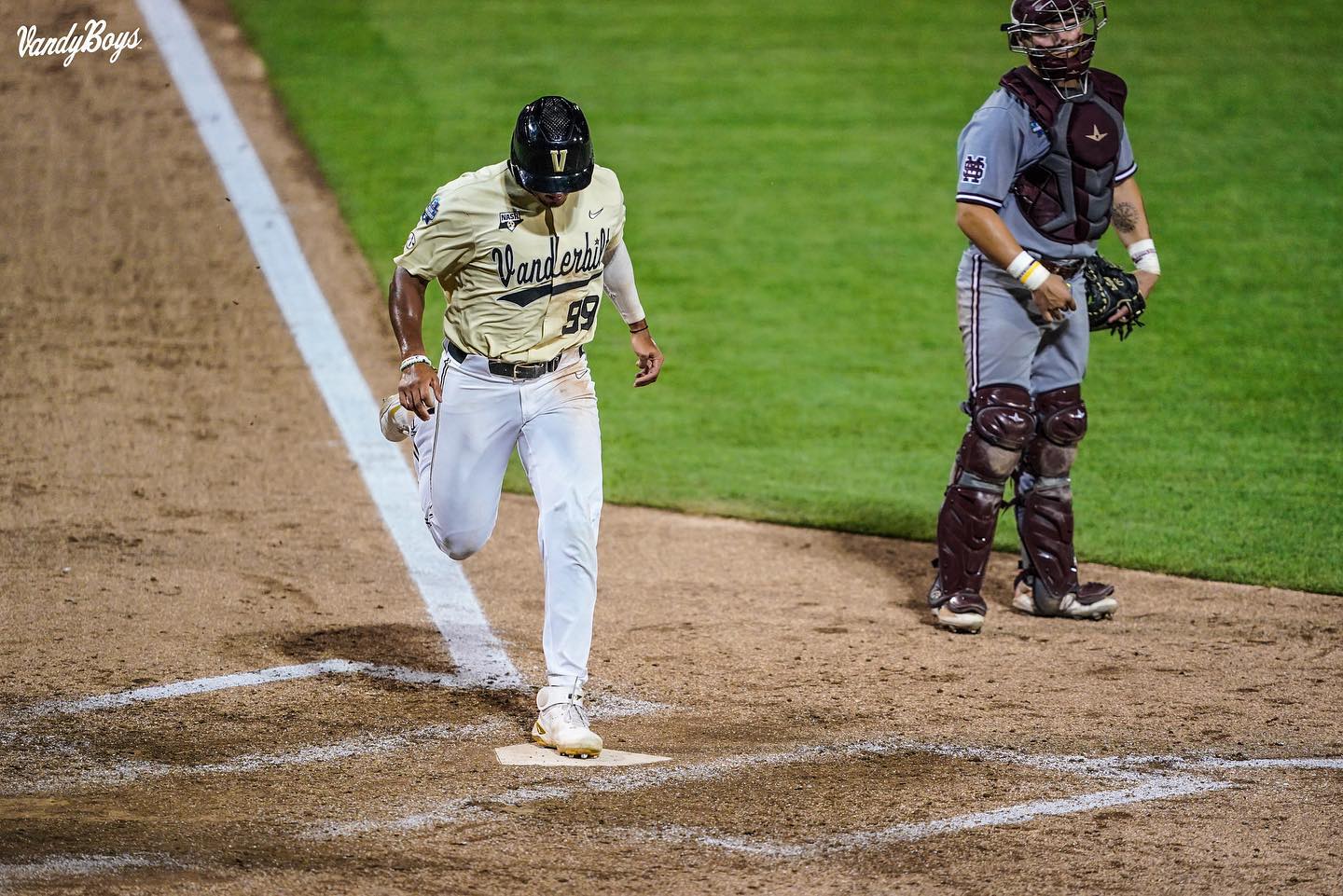 Jayson Gonzalez, Vandy third baseman, touching home plate, wearing a Twice the Fight wristband, after his three-run homer in the first game of the championship series.

Vanderbilt’s support for Team Jack wasn’t the first from a CWS team. Back in 2016, the Miami Hurricanes and Coastal Carolina Chanticleers both sported custom Team Jack Foundation Omaha t-shirts. The opportunity to raise much-needed awareness for pediatric brain cancer, the leading cancer cause of death in children, is something the Foundation appreciates greatly, Executive Director Kylie Dockter said, “Having these collegiate teams continue to support our cause at one of the largest NCAA annual events means so much to us.  It’s just another example of how these teams use their platforms for a greater cause and in this case, it’s to help kids fighting this awful disease.” Despite advances in other types of diseases, children that battle brain cancer have been using the same treatment protocol since the 1980s. These treatments are toxic and oftentimes ineffective. “Funding research to develop targeted therapies designed just for children and those with specific mutations is our priority. We want these kids to beat their diagnosis and live a full normal life.” 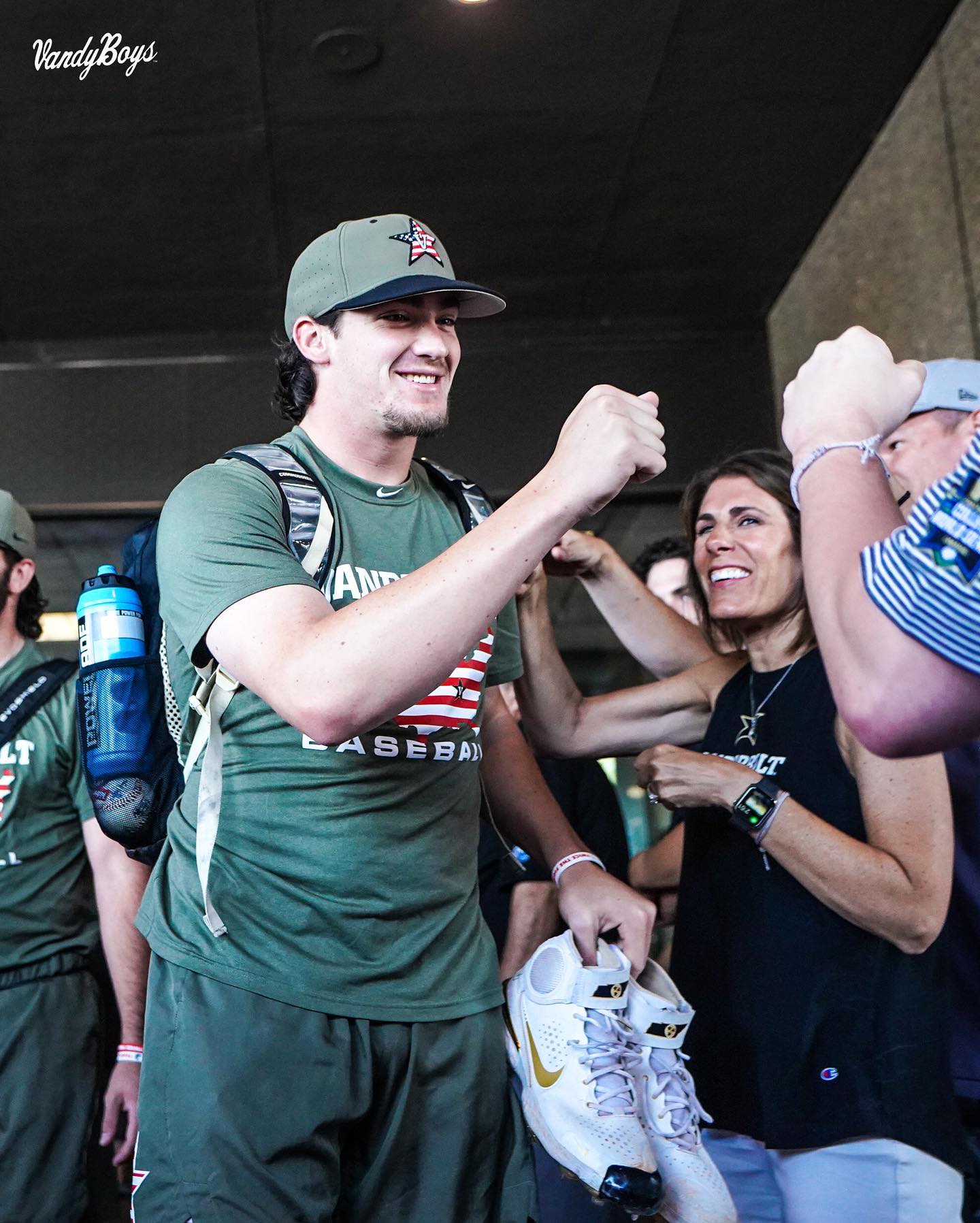 Patrick Reilly, Vandy freshman right-handed pitcher, wearing a Twice the Fight wristband before their game against Stanford on June 23rd.