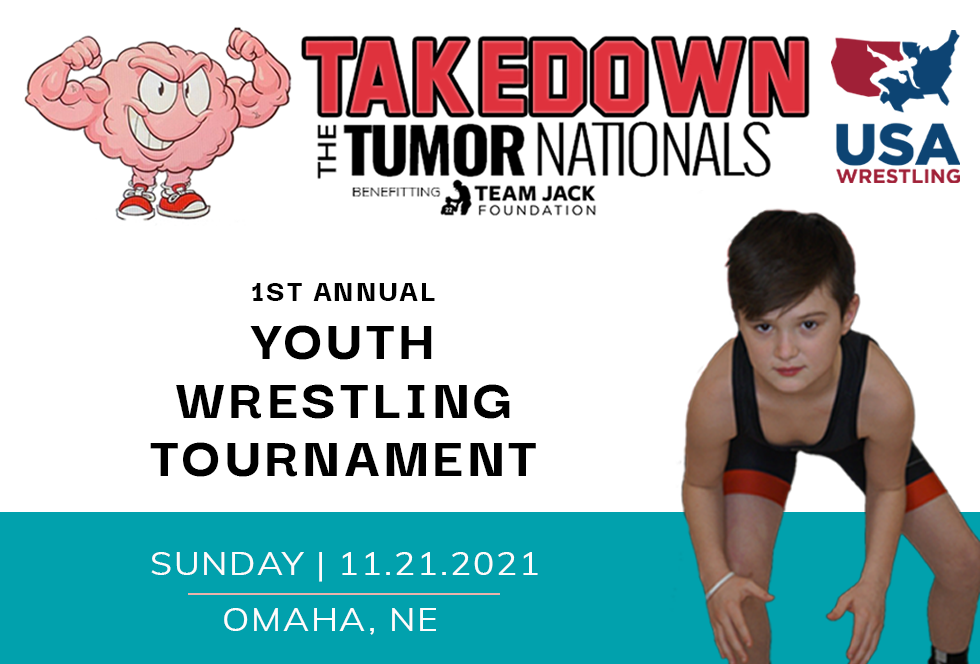 The Team Jack Foundation is excited to announce the inaugural Takedown the Tumor Nationals, a youth wrestling tournament, set for Sunday, November 21, 2021. The event will be held at Sapp Fieldhouse on the campus of the University of Nebraska Omaha. Proceeds from the tournament will benefit Team Jack’s childhood brain tumor program at the University of Nebraska Medical Center and Children’s Hospital & Medical Center in Omaha, Nebraska.

The family of 12-year-old Kieran Akerson of Valley, Nebraska, is organizing the event with the help of the Omaha Metro Area Wrestling Association and Nebraska USA Wrestling. Kieran is an avid wrestler and last December was diagnosed with brain cancer. He underwent a tumor resection surgery and is now being monitored for further growth but is back on the wrestling mat. After learning about the outdated treatments and severe lack of research funding for the disease, Kieran’s parents, Josh & Marie, wanted to do something to help. 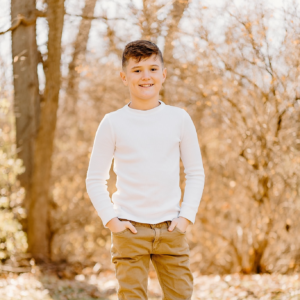 Marie Akerson stated, “As a mother, I wanted to do more and decided to combine three of my greatest loves…my child, wrestling, and making a difference in this world. With the help of OMAWA, Team Jack, and the generosity of sponsors…our dream has become a reality. Please consider joining us in making a difference in the lives of children diagnosed with brain cancer.”

Takedown the Tumor Nationals is open to both boys and girls, ages five through fourteen. The event also offers an opportunity for adults to wrestle as well with men’s and women’s divisions. Four-foot-tall trophies will be awarded to the first winner in each youth bracket, with second through sixth place receiving custom five-inch medals. The Takedown is the first event in the Tour of Nebraska wrestling series with a sixty-point value.

In addition to wrestling, the registrants had the opportunity to raise funds to help Team Jack with their mission to fund impactful childhood brain cancer research. Primarily using social media, over twenty-five fundraisers have worked to raise a combined total of $10,500 with the top three kids raising over $4,000 alone! Funding research is a vital piece to the development of kinder, more effective treatments for childhood brain tumors and these fundraisers are playing an important part in that.

“We continue to be amazed by the ideas that people have to help us raise funds for our cause. Hosting a wrestling tournament is definitely a new event for us, but we have been fortunate to have the help of the Akerson family, OMAWA and Nebraska USA Wrestling and we have no doubt this will be a great tournament for the kids and a successful fundraiser for childhood brain cancer,” said Kylie Dockter, Team Jack Foundation Executive Director.

Registration for Takedown the Tumor Nationals will be open until Friday, November 19 at 12:00 PM. Visit https://teamjackfoundation.org/event/takedown/ to register and for more information!

The Team Jack Foundation’s mission is to raise research funds and awareness for childhood brain cancer. The disease affects nearly 4,600 children each year and is the leading cancer cause of death in children. Each year less than four percent of U.S. federal funding is solely dedicated to childhood cancer research, with even less spent on child brain cancer research. The Team Jack Foundation has raised over $9 million for pediatric brain cancer research and has invested in twelve research projects nationally. One area of focus for the Foundation is the development of a childhood brain tumor program in Omaha, Nebraska. Team Jack has committed $6.5 million toward the program at UNMC and Children’s Hospital & Medical Center that funds clinical and laboratory research, pain management in cancer and education. The Foundation will continue working with world renowned researchers, directly, to develop relevant and impactful research initiatives. https://teamjackfoundation.org/

The Omaha Metro Area Wrestling Association is a non-profit organization based in Omaha, Nebraska whose mission is to collaboratively use youth wrestling to teach lessons today for future success in other aspects of life. They work to strengthen their community commitment to prepare youth to wrestle at the high school and collegiate levels. http://omawa.org/

Nebraska USA Wrestling (Nebraska Kids Wrestling Federation) is a non-profit organization that promotes amateur wrestling to all Nebraska wrestlers from little kids to adults. NKWF educates, promotes, and structures wrestling in both collegiate and international styles. They are dedicated to the improvement of all phases of Nebraska Wrestling and are an affiliate of the national organization USA Wrestling. https://www.nebraskausawrestling.org/