Takedown the Tumor Nationals Raises over $72,000 for Team Jack Foundation 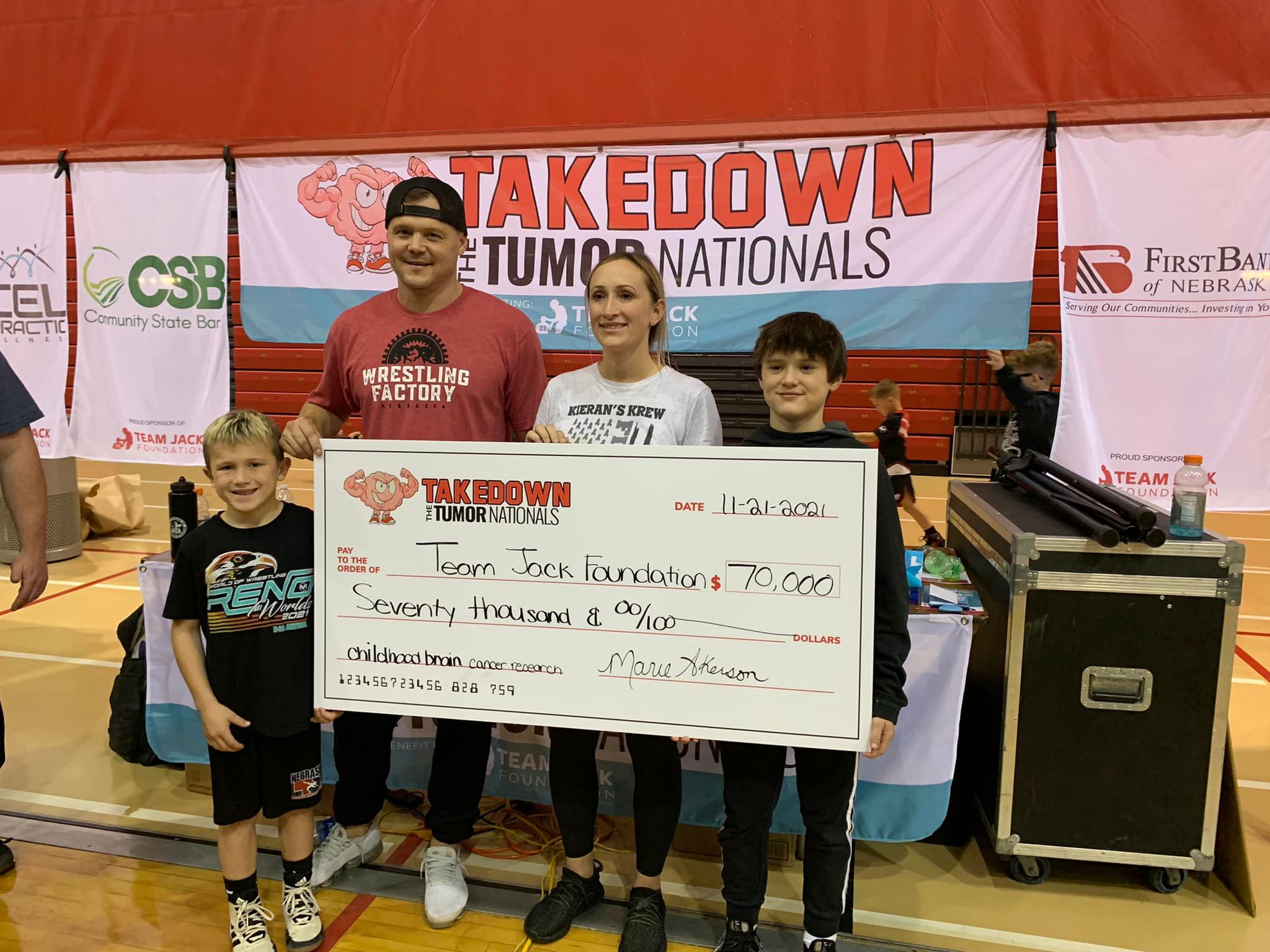 Omaha, NE – On Sunday, November 21, over 320 youth wrestlers from 15 states converged upon the University of Nebraska Omaha’s Sapp Fieldhouse for the first annual Takedown the Tumor Nationals youth 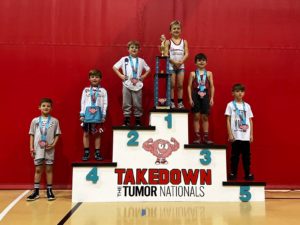 wrestling tournament. Four-foot-tall trophies were up grabs for each division champion, with five-inch custom medals going to the second through sixth place finishers in each division. Team champions and runners-up were also awarded trophies. Weigh-ins were held for wrestlers on Saturday, with the first wrestling session starting at 8:00 am on Sunday.

Wrestlers were given the opportunity to fundraise for Team Jack. They could earn their entry fee back along with other cool prizes like custom Takedown the Tumor Nationals singlets, hoodies, sweatpants, and more. Fifty wrestlers fundraised for Team Jack, raising $15,000 for childhood brain cancer research!

Takedown the Tumor Nationals was the first wrestling event on UNO’s campus since 2011 when their collegiate program was cut. While this was difficult for some to handle, people were able to put aside their reservations and come out and support the wrestlers and the cause being supported.

“I’m so happy that they’re finally having wrestling back here. I’m really excited about the kids being able to compete where I competed. It feels good to be back in here and see wrestling mats on the floor. It’s amazing,” said Georgi Ivanov, Executive Director of Nebraska USA Wrestling, Youth Coach for The Best Wrestler, and UNO Wrestling Alum.

Thank you to our sponsors, wrestlers, spectators, and donors who together helped raise over $72,000 for the Team Jack Foundation. A special thank you to our mat sponsors: Forever Nate Foundation, Valley Marine, Community State Bank, Trophies Plus, Raising Cane’s Chicken Fingers, Anesthesia Class of 2013, NL & L Concrete, Inc., Excel Chiropractic, Alpha Surveying, The Wrestling Factory, and The Brian Duensing Foundation. The funds will be invested in Team Jack’s Childhood Brain Tumor Program at the University of Nebraska Medical Center and Children’s Hospital & Medical Center in Omaha, Nebraska. This program funds laboratory and clinical research, pain management in cancer, and education for the betterment of children with brain cancer, right here in Nebraska.

This event was held in honor of 12-year-old brain tumor fighter Kieran Akerson. Kieran is from Valley, Nebraska, and is a multiple-time state wrestling champion. Last December, he was diagnosed with brain cancer. Fortunately, Kieran was able to join the wrestlers and compete at the event, finishing second in his bracket. After Kieran was diagnosed, his parents, Josh and Marie, learned about the severe lack of research funding for childhood brain cancer and wanted to do something to help. With the help of Omaha Metra Area Wrestling Association (OMAWA) and Nebraska USA Wrestling, the Akersons were able to organize a successful fundraiser for the cause!

“It got started because Kieran’s been wrestling forever. When he was diagnosed with a brain tumor, we learned how poor and outdated the treatment options for kids were.  We also learned how underfunded research for this disease is. We decided we wanted to do more, so we combined our love for wrestling and the need for funding to create this tournament. Overall, we are overwhelmed with how successful this first-year event was and grateful for all those who came out to support it,” stated Marie Akerson, Kieran’s mom and tournament organizer.

About Team Jack Foundation
The Team Jack Foundation’s mission is to raise research funds and awareness for childhood brain cancer. The disease affects nearly 4,600 children each year and is the leading cancer cause of death in children. Each year less than four percent of U.S. federal funding is solely dedicated to childhood cancer research, with even less spent on child brain cancer research. The Team Jack Foundation has raised over $9 million for pediatric brain cancer research and has invested in twelve research projects nationally. One area of focus for the Foundation is the development of a childhood brain tumor program in Omaha, Nebraska. Team Jack has committed $6.5 million toward the program at UNMC and Children’s Hospital & Medical Center that funds clinical and laboratory research, pain management in cancer and education. The Foundation will continue working with world-renowned researchers, directly, to develop relevant and impactful research initiatives. https://teamjackfoundation.org/

The Omaha Metro Area Wrestling Association is a non-profit organization based in Omaha, Nebraska whose mission is to collaboratively use youth wrestling to teach lessons today for future success in other aspects of life. They work to strengthen their community commitment to prepare youth to wrestle at the high school and collegiate levels. http://omawa.org/

Nebraska USA Wrestling (Nebraska Kids Wrestling Federation) is a non-profit organization that promotes amateur wrestling to all Nebraska wrestlers from little kids to adults. NKWF educates, promotes, and structures wrestling in both collegiate and international styles. They are dedicated to the improvement of all phases of Nebraska Wrestling and are an affiliate of the national organization USA Wrestling. https://www.nebraskausawrestling.org/