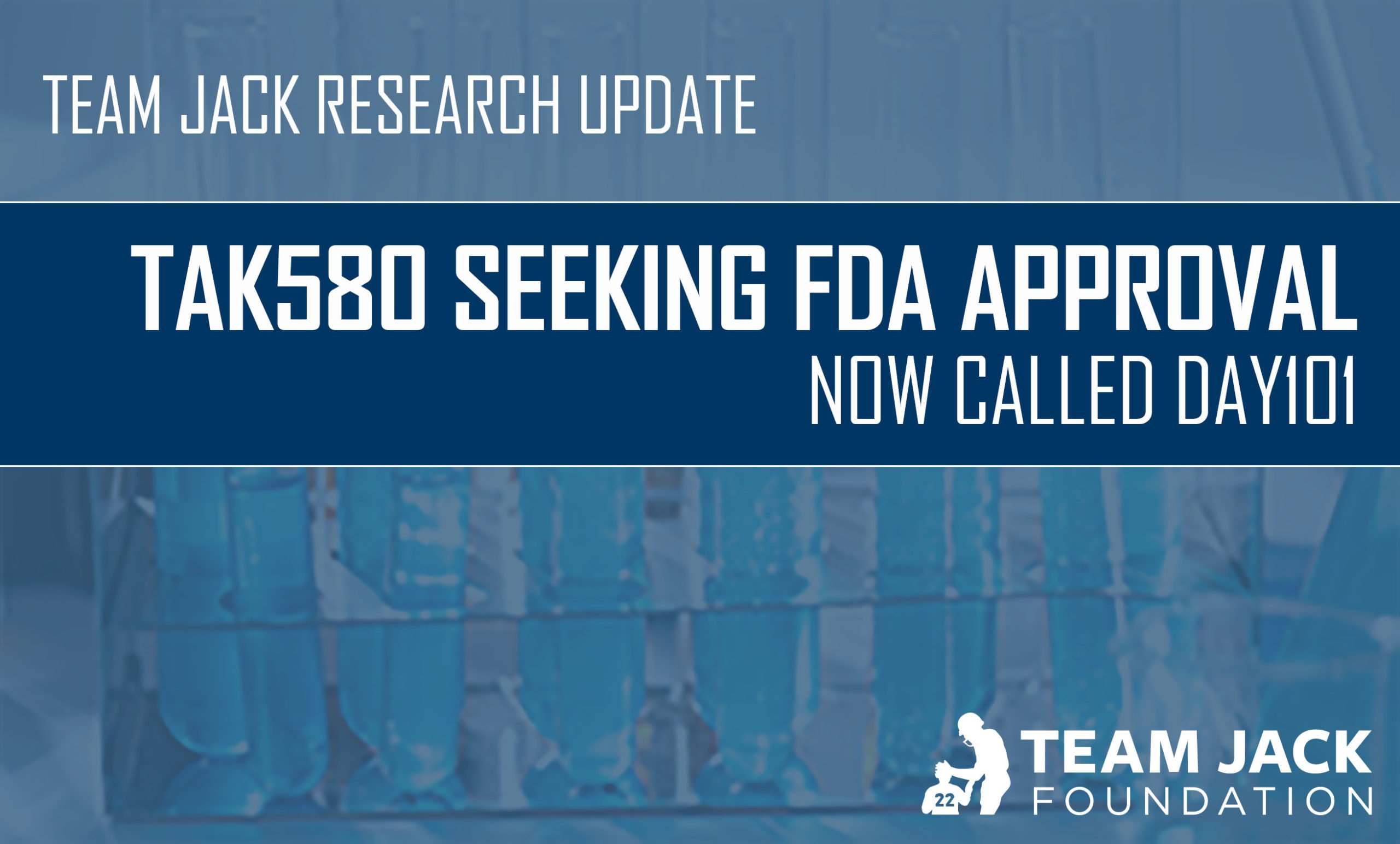 Tuesday, June 2, 2020 – Atkinson, Nebraska – Cancer drug development has improved in recent years, yet the timeline for new drugs for children lags significantly behind those for adults with cancer.  The Team Jack Foundation is trying to change that.

In 2017, the Team Jack Foundation joined other national non-profits to fund basic/translational science and subsequently the clinical trial phases of a project entitled TAK580 lead by Principal Investigator, Dr. Karen Wright, at Dana-Farber Cancer Institute in Boston, MA.  This promising therapy is an oral treatment taken once-a-week for children battling relapsed glioma brain tumors. To date, the Team Jack Foundation has committed $800,000 to this project.

“Team Jack has continued their financial support to move that pre-clinical work into the clinical arena and actually get the drugs directly to the patient which tends to be an issue in general for pediatrics, one because it’s not a priority often for pharma companies and secondly because it’s really difficult to get funding for clinical trials.” –Karen Wright, MD, MS, Dana-Farber Cancer Institute and Lead Principal Investigator for TAK580.

Recently, a new pharmaceutical company was launched called Day One Biopharmaceuticals, whose focus is to bring new treatments to market that benefit all ages, including children, fighting cancer.  Recognizing that new treatments can benefit both children and adults with cancer, Day One prioritizes programs that can be accelerated to market for both younger and older patients.  The name “Day One” was inspired by the “Day One Talk”, in which families first hear of their child’s cancer diagnosis.

On May 21st, Day One announced that they had acquired TAK580 (now called DAY101), and it will be their top priority. Day One is developing DAY101 as a targeted treatment for children with brain cancer and is working to bring this new therapy to market worldwide.

“It’s a drug that is unique in its mechanism of action: It targets BRAF-mutated cancers, but also cancers with BRAF wild-type fusions,” said Samuel Blackman, M.D., co-founder and chief medical officer of Day One, referring to cancers with no known BRAF mutation. “A large subset of pediatric tumors is driven by BRAF wild-type fusion, not mutated BRAF. That fusion has been recognized in this subset for over 10 years.”

The Dana-Farber team discovered that the drug TAK-580 targets the KIAA1549-BRAF mutation, found in most low-grade gliomas, indicating that the therapy might work against tumors harboring these alterations. Intriguingly, TAK-580 might also attack other abnormalities within the tumor, meaning it could even work against tumors without either the V600E or KIAA1549-BRAF mutation. The clinical trial has studied the drug’s efficacy and has leveraged a novel blood test to detect tumor cell DNA, allowing the team to profile tumors for future targeted therapies and monitor response without the need for surgery, transforming care.

Low-Grade Gliomas
Low-grade gliomas because of their location are difficult to be completely surgically resected, thus require drug therapy. Day One’s announcement of DAY101’s development and fast-track for FDA approval is groundbreaking for kids fighting low-grade gliomas as there are few existing drug therapy options that target the specific mutations present in these tumors.

The drug has been tested in more than 250 patients, both adults and children, as it is currently in an investigator-sponsored trial testing it in children with relapsed gliomas. Day One will unveil safety and efficacy data this year and next year.

Additional Resources
In addition to the Team Jack Foundation, the development and progress of DAY101 was also funded by: Pediatric Brain Tumor Foundation, Thea’s Star of Hope, and Why Not Me?.

Announcement from Day One Biopharmaceuticals:  https://dayonebio.net/news/news-3/