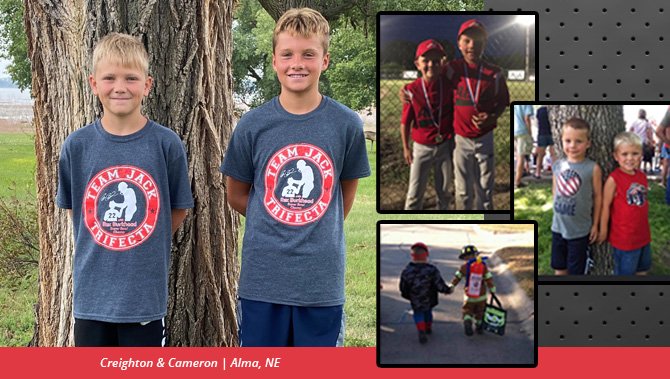 How did two 12-year-old best friends from a town of less than 1,200 people raise nearly $6,000 for Team Jack? Let us introduce you to Cameron Waldo and Creighton Lynch, from Alma, Nebraska, who combined their determination, hard work and good old-fashioned pavement pounding to make quite a mark at Rex Burkhead’s 4th Annual Trifecta event.

Creighton and Cameron have known each other since their early days at Under the Umbrella Daycare in their small town. Since that time, the 6th graders have been best friends. They play every sport together, swim on the same relay teams on swim team, and ride their bikes all over town.

Creighton’s dad Jeff said, “They push each other to be better in everything they do! They are ultra-competitive young men.”

In addition, both boys put their competitive spirit to good use and signed up to become social fundraisers for Team Jack. They each set a personal fundraising goal: Cameron’s was $500, and Creighton’s was $1,000. With the help of their parent’s social media accounts and emails to family and friends, the boys quickly realized they needed to raise those goals as they surpassed them within the first 24 hours! As their donation totals started to rise, they even went door to door in their community and personally visited with residents telling them about their involvement in the Trifecta and the mission of Team Jack. They received donations from 172 individuals and businesses. Cameron raised $2,814.99 and Creighton’s total was $2,940.65.

“It feels so awesome to raise money for such a great cause! I know first-hand how hard cancer is and I want to do whatever I can to help others,” said Cameron.

Both families have been touched personally by cancer and understand how devastating it is. Creighton’s grandfather Bill was diagnosed with a glioblastoma brain tumor in 2006. He died in 2011 when Creighton was just two years old.

“Both of my grandpas had cancer and after losing one of them to brain cancer, it is important to me to do what I can so more research can be done,” Creighton said. “I am a huge Creighton Bluejays basketball fan and was also inspired by the annual pink-out game they have to raise money for cancer in Omaha. Having their Head Coach Greg McDermott donate to my fundraiser was pretty cool!”

These enterprising young men took the initiative to make a difference not only in their community, but beyond.

Team Jack Executive Director Kylie Dockter said, “Team Jack Foundation was inspired by their ambition – and the money they raised will have a positive impact on our effort to fund research for pediatric brain cancer.”

These two small town best friends are an example of the generous spirit Nebraskans are known for. Not only did they excel in their Trifecta athletic events, but they teamed up to be superstar fundraisers with hearts of gold.  Who wouldn’t want a best friend like that?