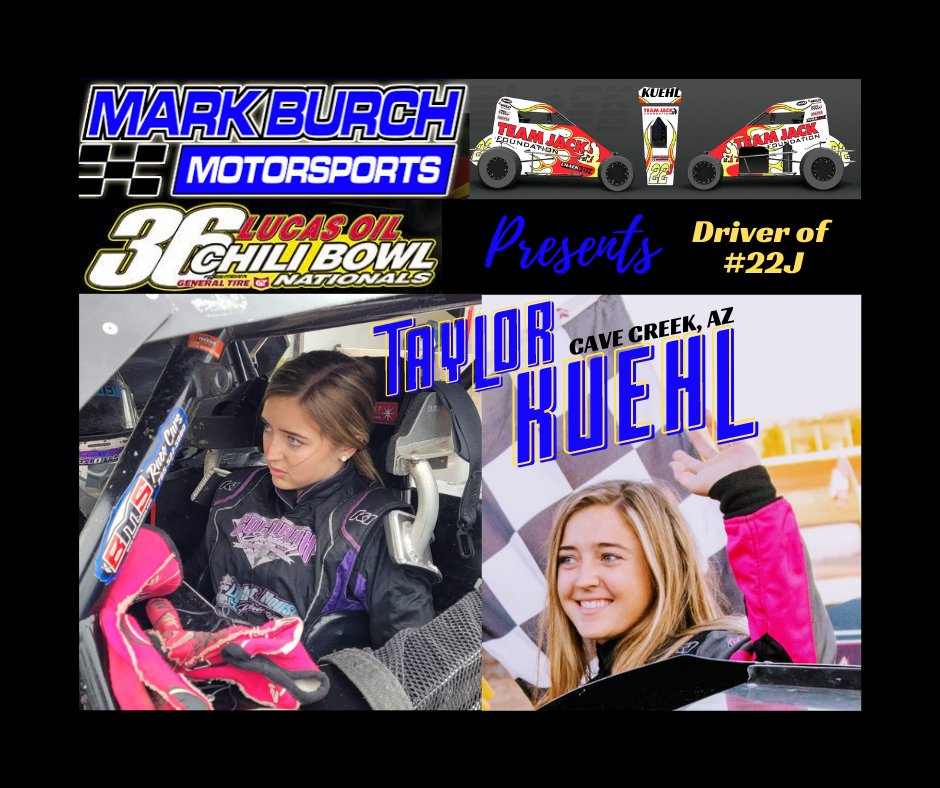 LINCOLN, Neb (November 29, 2021) – Mark Burch Motorsports and team partner Don Droud Jr. are excited to announce that IMCA Sport Mods driver Taylor Kuehl, 21, from Cave Creek, AZ has been selected as the pilot for the #22J team car for the 2022 Chili Bowl Nationals in Tulsa, OK in January.

Kuehl, the 2020 Arizona Karl Kustoms Northern SportMod Dirt Track Tour Champion, earned this ride after presenting Burch with a compelling and heartfelt plan of how she believed it was crucial for her to be an advocate for Team Jack Foundation through this midget experience to help bring awareness to pediatric brain cancer.  Her desire to make Team Jack Foundation a priority was exactly what Burch and Droud wanted from the candidate they selected.

“We were looking for a driver that had passion for our foundation that is near and dear to us, but also a driver that was open to being mentored and that has a bright future in front of them. We had many great candidates for the second car.  Kuehl’s professionalism, work ethic and passion are the traits of any successful person, let alone a racing driver. She has a proven track record being in victory lane in her IMCA Sport Mods many times and has the mindset of the type of driver we want to represent us and we look forward to her being part of our 2022 Chili Bowl team,” Burch adds.

Kuehl has been racing since she was five years old, starting out in go-karts both on dirt and asphalt.  She later moved to IMCA Mod Lites and has competed in IMCA Sport Mods for the last three years, capturing five feature wins and the AZ Track Tour Championship.  In 2020, Kuehl wanted to diversify her racing outside of AZ and relocated to Montana where she learned to work on a farm to earn an income to put into her racing and raced in several surrounding states.

2021 brought more changes as Kuehl loaded up her Sport Mod and relocated herself out to Boone, IA where she made Boone Speedway home.  On her own, with one crew member, she competed at several Iowa tracks each week, often becoming the sole mechanic as well.  Her determination to chase her dream allowed her also to be one of the top contending drivers at the IMCA Super Nationals at Boone Speedway.

“I can’t wipe the smile off my face”, says Kuehl, as she prepares to represent Burch Motorsports and go to work for Team Jack. “This is an opportunity that came my way as one of my sponsors introduced me to Mark and encouraged me to reach out about my desire to get seat time in multiple forms of racing, including a midget.” “My desire is to race ARCA someday.  I love racing so much that anything I race, I approach it with a learning opportunity that will carry over to other types of racing.”

Kuehl goes on to say, “what I love most about this partnership is being able to tie my racing together to make a difference in the world. The partnership with Mark has an expectation to be an advocate for children with brain cancer. I can walk in victory lane every day by bringing awareness to fans and sponsors about this underfunded type of cancer. I look forward to meeting the families battling this disease and use my racing to bring smiles and hope to the kids.”

Jack Hoffman is the inspiration behind the foundation.  After being diagnosed with brain cancer at the age of five, his parents co-founded the non-profit. Burch and his wife Mari are personal friends of Jack and his parents, and have used dirt track racing to expose the need in the area of research and treatments.

To make a donation to Team Jack in honor of Taylor Kuehl, click here.