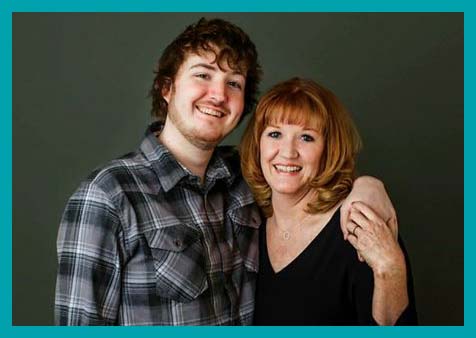 Donate in Honor of Nick

In January 2015, Nick Herringer (pictured above with is mother, Tammy), who was then a freshman at Hastings High School, started complaining about severe headaches and extreme fatigue. Nick was diagnosed with migraine headaches and put on a steroid to help with the painful headaches and the rash that developed on the left side of his face. Once Nick had finished taking the steroid, his symptoms would return almost instantly. In late January, Nick started throwing up nonstop for hours, and went to the hospital for blood tests and returned home with nausea pills and pain meds. Nick’s condition worsened and he returned to the ER. After a CT scan, the ER doctor told the Herringer’s that there was a mass on Nick’s brain the size of an orange and sent him by ambulance to UNMC in Omaha.

In February 2015, Nick had surgery to remove the brain tumor. He was diagnosed with grade 4 glioblastoma at the age of 14. He went through six weeks of daily radiation treatments followed by one year of chemotherapy. He finished treatments in May of 2016. Nick was then put on a schedule to scan every three months. In December of 2016, after a routine scan, the Herringer’s were told that Nick’s cancer was back, and he had his second craniotomy. Pathology results confirmed that there was no cancer, but instead necrosis or radiation scarring. He was told to go live his life and put back scans every three months.

In November of 2017, they were once again told there was a spot on the scan the doctors believed to be cancer. Nicholas was enrolled in a clinical trial in Colorado. He did five Immunotherapy treatments, but in February, a routine scan confirmed the tumor was continuing to grow. On March 8, 2018, Nick had his third craniotomy. Pathology confirmed grade 4 brain cancer once again. Nick endured six more weeks of daily radiation treatments along with chemotherapy. In July, Nick then enrolled in his 2nd clinical trial through the Children’s Oncology Group. For the next four months, Nick took 119 pills per week. Of those 119 pills, 56 of them were clinical trial drugs. The remaining 63 pills were used to combat side effects of the trial drugs.

Unfortunately, on November 30, 2018, Nick’s MRI showed tumor regrowth and he was immediately taken off the trial. During the month of December, Nick had been screened for five different clinical trials. Two CAR T Cell trials at Seattle Children’s, the Polio Vaccine trial at Duke, the Herpes Vaccine trial at Children’s of Alabama, and an immunotherapy trial at St. Jude’s. He was turned down for all five trials for various reasons.

In mid-January 2019, Nick enrolled in a T Cell trial at Children’s National in Washington, DC. Nick had the two blood draws to begin the T Cell trial in late January and early February and received the first infusion of his altered T Cells on April 2, 2019. Between the time that Nick had the two blood draws to start the T Cell trial and when he received his first infusion of T Cells, Nick’s scan images showed that all tumor nodules on both sides of the right and left frontal lobes were completely gone! This was amazing news especially since it had been just 26 days since Nick’s last scan and he had only taken 10 chemo pills and one chemo infusion in the time between the scans. The Herringer’s believe the only explanation of Nick’s scan result is the power of prayer and their strong reliance on God. Their faith also helped the Herringer’s in October 2019, when Nick and his father Jay were in a terrible car accident on their way to a Make-A-Wish fundraiser. Nick suffered breaks in his pelvis, a severely sprained ankle, and swelling and bruising on his brain. After his hospital stay and rehab, Nick regained his strength to face his 4th craniotomy in January 2020.

His MRI in April 2020 showed enhancement, so he began treatment again. Nick continues to fight and inspire those around him. He has never once complained about this diagnosis. Nick has a very strong faith in God, and he is trusting this situation to Him.

To make a donation to fund child brain cancer research in honor of Nick and his fight, click the red donate button at the top of the page.