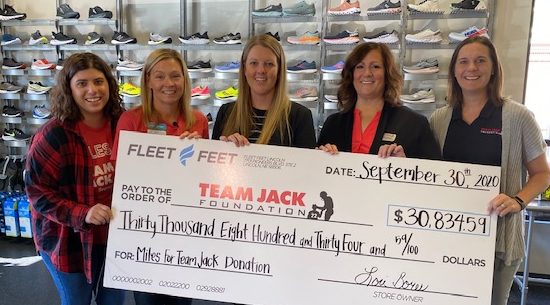 Atkinson, Nebraska – Throughout the month of September, nearly 1,100 people from Nebraska and beyond walked or ran to honor Andy Hoffman, his family and to help Team Jack with their mission. Shortly after Andy’s brain cancer diagnosis this past July, the owner of Fleet Feet in Lincoln and Omaha, Lori Borer, had an idea to rally around Andy and his family during this difficult time by walking or running. Andy was an avid runner, having completed six full marathons, the last one being this past March in Los Angeles. In addition to running, Andy’s other passion is to find a cure for childhood brain cancer through the Team Jack Foundation. As a result, the month-long challenge, Miles for Team Jack, was born.

Fleet Feet owner, Lori Borer, stated, “With everything the family has done for this community and across the U.S. to raise awareness and money for childhood brain cancer, this was something we could all come together and do for this family during this time and give back to them a little bit.”

Individuals could choose from the 50-mile or 100-mile options. Once September first hit, the challenge began! What started out as a way to support the Hoffman family, turned into a major fundraiser for childhood cancer brain cancer research.

“We are just overwhelmed by the generosity and graciousness of everyone that participated in the Miles for Team Jack challenge. The continued support from not only our local communities, but from Husker Nation and beyond is truly inspiring,” said Team Jack Executive Director, Kylie Dockter.

When September 30th had come and gone, over 70,000 miles were logged and nearly $31,000 was raised for the Team Jack Foundation. The funds were raised through a portion of the registration fee, social fundraising and donations given by participants.

Fleet Feet and Team Jack kept the participants engaged by offering contests within the challenge including top male and female milers and top two social fundraisers. Two of the three winners happened to be from Atkinson, Nebraska which is the Hoffmans hometown and where the Team Jack Foundation is based. 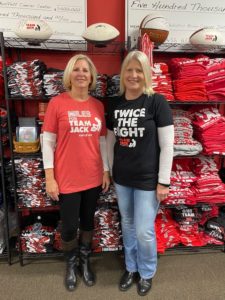 Two of the contest winners, Diane Tasler, left, and Lisa Bilstein, right, both of Atkinson, Nebraska.

The top female miler out of all participants was Diane Tasler with 304.61 miles in the 30-day month! Diane said this about the challenge, “The challenge was something I could do in support and I was already walking anyway. Mike and were involved in the first gala held in Atkinson, so it was something I could do to continue our support. I did walk more because of the challenge and said many prayers while walking for Andy, Bri and their family.”

Lisa Bilstein was the top social fundraiser for the challenge, raising $1,098.06 for Team Jack. “The challenge was a fun way to keep moving for a great cause. Honoring the Hoffman family’s journey through a little fundraising was just a small thing I could do,” Lisa said.

This is a great example of raising funds and awareness for a cause with just a small investment. The fee to participate in the challenge was just $25, but a drop in the bucket has a cumulative effect.