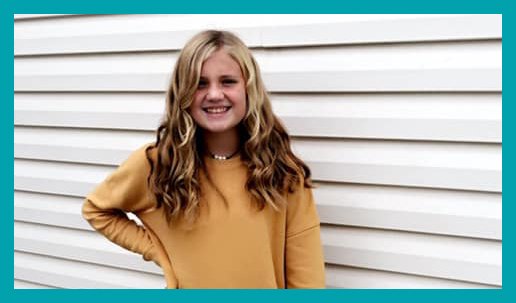 Donate in honor of Katelyn

At just four years old, in February, 2013, Katelyn Sybrandts was diagnosed with ependymoblastoma, a rare tumor near her tailbone.  The tumor was so rare that only two other reported cases world-wide.  Ependymoblastoma is a highly malignant brain tumor usually occurring in young children.  Katelyn’s was different.  Her tumor was found in her tailbone. The doctors did a lot of research and tried to find someone, somewhere and they had no idea how this brain cancer got where it did. Her tumor had been diagnosed as either a sebaceous cyst or a teratoma tumor, which are both benign. It was not until her tumor was removed and biopsied that they learned the diagnosis. The first surgery Katelyn had was to completely remove the tumor.  They then did a repeat MRI and found something else.  To look closer, they did a full body MRI and found that there were no tumors in the brain or on the spinal cord, which was a concern as this type of cancer is typically in the brain.  However, they did find a spot of concern on the front of her tailbone.  Her second surgery consisted of a tumor resection of that tumor and to remove lymph nodes.  The third surgery was line placement where they moved her ovaries for radiation. In total, Katelyn had three surgeries, 14 rounds of chemotherapy and 30 radiation treatments.  She started chemotherapy in March of 2014.  In the middle of her chemotherapy, she did 30 radiation treatments and then right back to chemotherapy, finishing in November.   As of December 2014, Katelyn had no tumors. Katelyn continued to be monitored by MRI’s and in May 2019, after being off treatment for five years, was declared cancer free. She has yearly check-ups with the doctors to make sure she keeps moving in the right direction and is always spreading her sparkle!

To make a donation to fund child brain cancer research in honor of Katelyn and her fight, click the red donate button at the top of the page.