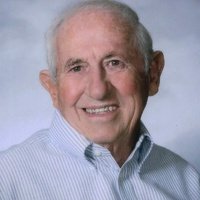 Donations maybe be made via check maybe payable to Team Jack Foundation and mailed to PO Box 607 Atkinson, NE  68713. To donate online, click the donate button below.

Donald J. Gokie (Gok) was born to Eileen and Conrad Gokie on March 7, 1935 in Emmet, NE.  He was the oldest of four children. He was a hard worker since he was a youngster- throwing bales at the age of 8, helping in his dad’s gas station, working in the hayfield, and even traveling to Omaha while in high school to work at the bus depot (fibbing about his age to get the job).  He always drove a nice car and enjoyed it with his many high school friends.  He was a four-year varsity starter for St. Joseph’s High school basketball team and thoroughly enjoyed the many memories from those years.  He graduated from St. Joseph’s High School in 1954.

After graduation, Don moved to Omaha where he learned the locksmith and auto body trade.  He was married to Marilyn Kramer on November 14th, 1957 in Atkinson.  In 1960, Marilyn and Donald moved back to Atkinson, along with their two young sons.  They later added two daughters to their family.  He began his long, successful career at Kramer Machine Shop taking over the next generation of ownership from Leo Kramer.  He continued to work at the shop with his son Jayme and grandson Brent until his passing.

Don was mayor of Atkinson in the mid 1970’s and worked with city council to have all main streets in Atkinson paved.  As mayor, he addressed questions ranging from the high cost of the infrastructure improvements to squirrels in a tree that was bothering a citizen.

Dad was a long-time member of the Lions Club and enjoyed manning the cook shack.  He had a stretch of more than 20 years of building floats for Hay Days Parades.

He was a member of the Cotton Rainbow Fish Club for over 50 years.  He truly enjoyed helping business owners with start up businesses.  Gok also enjoyed moving old farm homes into town, restoring them, then renting them out.   Gok was always proud of Atkinson and truly loved giving tours to newcomers and family and friends when they visited.  He and Marilyn never missed an alumni banquet and were thrilled to welcome their classmates from across the country to their home every year.

He and Marilyn enjoyed traveling with friends and particularly enjoyed their annual trips to Cabo for the last 30 years.

He was proud of all his children and thoroughly enjoyed watching them play sports and participate in other activities.

In more recent years, he loved spending time with his 11 grandchildren and was the proud great-Papa to 14 great-grandchildren.