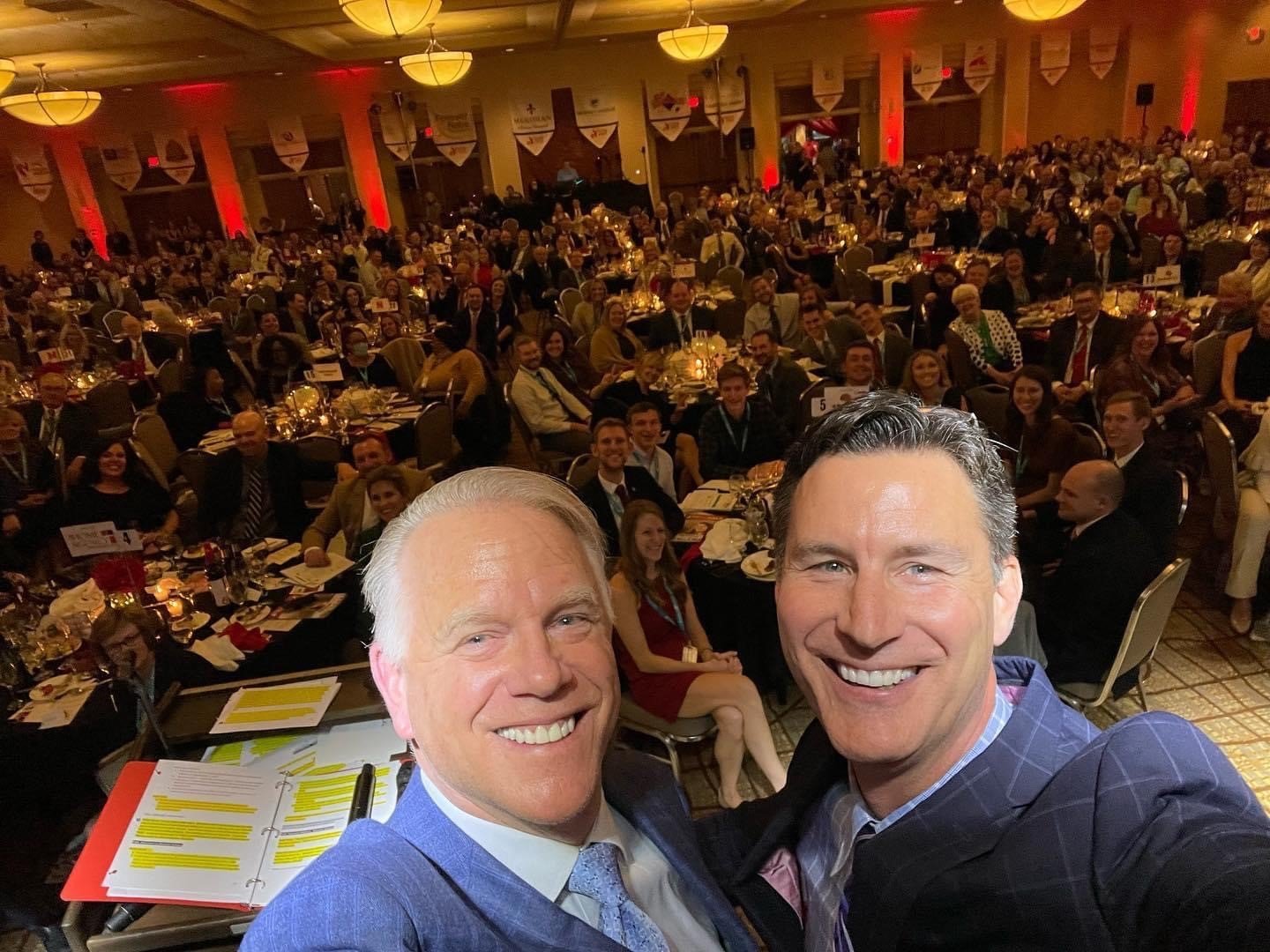 Lincoln, Nebr. – On Saturday, February 26, the Team Jack Foundation held their 9th Annual Gala presented by Fat Brain Toys. The event was held at The Lincoln Marriott Cornhusker Hotel in downtown Lincoln, Nebr. The sold-out event gathered nearly 700 guests and raised a record-high, $635,000 for childhood brain cancer research. The evening was filled with emotion and inspiration as stories from families affected by childhood brain cancer, research successes, and an inspiring keynote were shared.

Rex & Danielle Burkhead opened the evening with the welcome and invocation. Karen Carson, the co-founder of Fat Brain Toys, came to the stage and thanked the supporters and volunteers for all the work to ensure the success of the evening. She also presented Team Jack with a $100,000 check for childhood brain cancer research. Not only are they important monetary donors, but their family and team is pivotal in the setup and teardown of the event.

Each year, the Foundation honors one of the families that has heard the words, “your child has brain cancer”. This segment of the evening, the Spotlight Story sponsored by The Home Agency, told the story of Kallie Brovold. Kallie, now 13 years old, was diagnosed with brain cancer at age four. Although she has been cancer-free for nearly ten years, Kallie deals daily with side effects from the very treatment that saved her life. This is one major reason that the Team Jack Foundation exists, to fund research so kinder, gentler treatments can be discovered to allow children to lead happy, healthy, normal lives following their cancer treatment. Kallie’s mother, Jessica said, “it’s more than just about Kallie tonight because there are so many other people who have been impacted by this disease. There are empty seats at a lot of these tables tonight and I think about that. We’re here also to honor the legacy of those who could no longer be with us.” Jim Baldonado, the owner of The Home Agency, also presented Team Jack with a $100,000 check in support of the Foundation.

Another highlight of the evening was the 2021 Team Jack Teammate of the Year Award presentation. Dr. Kari Galyen, Team Jack Board Member, proudly presented Farmers Mutual of Nebraska, Mark Walz, President, Chairman, and CEO, with the award. Unfortunately, Mr. Walz was unable to attend the event, so Ann Parr, Executive Vice President, Secretary, and General Counsel accepted the award on his behalf. Farmers Mutual of Nebraska has been a supporter of the Team Jack Gala since it began in 2014 and in 2020 made a five-year commitment to Team Jack’s POWER5 Childhood Brain Tumor Initiative at UNMC and Children’s Hospital & Medical Center in Omaha, Nebraska. Partners like Farmers Mutual are vital to the development of Team Jack’s Brain Tumor Program in Omaha, which will give children in the region more treatment options without having to travel out of state.

Boomer Esiason, former NFL quarterback, sports analyst, and the Founder of the Boomer Esiason Foundation capped off the night with a very personal and moving message. He shared the story of his son, Gunnar, being diagnosed with cystic fibrosis at a young age and how they saw the critical need for research funding. Esiason paralleled his family’s foundation and their path to that of the Team Jack Foundation. BEF has raised more than $200 million for CF research and major breakthroughs have been found because of their funding. Since then, the life expectancy for those with CF has moved from 19 to 36, attributed to scientific breakthroughs made as a result of research and medical advancements. Gunnar is now married, and he and his wife recently welcomed their first child, which is a remarkable feat for CF patients. During his speech Boomer said, “money buys science and science buys life,” which is exactly what the Team Jack Foundation is working to do for childhood brain cancer. Esiason said this about Jack Hoffman’s famous touchdown run, “that was the University’s (of Nebraska) shining moment, for this university and this state, that memory will last a lifetime and it will change the lives of thousands of kids moving forward, and that I can promise you.”

To close the evening, Boomer Esiason helped emcee Rick Allen auction off an Esiason autographed Cincinnati Bengals jersey. After some competitive bidding, Esiason offered to donate another jersey, and the two winning bidders each paid $8,000 for their jerseys. This $16,000 was the perfect way to cap off a wonderful, record-setting evening.

To watch the replay of the Team Jack Gala or to donate toward the event, visit: teamjackfoundation.org/gala-2022/.