PLEASE NOTE: The Team Jack Gala was originally scheduled for February 27, 2021, but has been rescheduled to Friday, April 16, 2021.

The Team Jack Gala presented by Fat Brain Toys, is the largest annual fundraiser for the Foundation. Each year features an inspiring keynote, dinner, programming and live and silent auctions. In addition, families affected by child brain cancer are in attendance and honored during the event, making the evening extra special. Since 2014, over $2.5 million has been raised at the Team Jack Gala for research.

All proceeds from the event will benefit pediatric brain cancer research. 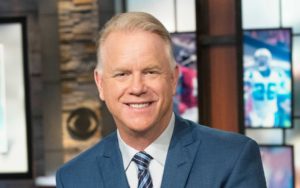 After an All-America career at the University of Maryland, Boomer Esiason enjoyed a 14-year career in the NFL as a quarterback for the Cincinnati Bengals, New York Jets and Arizona Cardinals. He became a four-time Pro Bowl quarterback and one of the most successful quarterbacks in NFL history, including being named the NFL’s Most Valuable Player in 1988.

When his son, Gunnar, was diagnosed with cystic fibrosis, Esiason launched the Boomer Esiason Foundation (esiason.org). The organization partners leaders in the medical and business communities with a committed core of volunteers to heighten awareness, education and quality of life for those affected by cystic fibrosis, while providing financial support to research aimed at finding a cure. Since its inception, the foundation has raised more than $115 million to support research toward a cure for CF, as well as programs directly benefiting the CF community.

Upon retiring from the NFL after the 1997 season, Esiason headed straight for the broadcast booth working as a football commentator for various networks through the years.

Gala tickets are limited, so make sure you purchase yours today!

We have a limited number of rooms reserved at the Lincoln Marriott Cornhusker Hotel with a special block rate ($109 per night). This rate is available starting Thursday, April 15, 2021 and ending Saturday, April 17, 2021.

To book a room as part of the 2021 Team Jack Gala block, you must reserve your room through this special online link. The last day to book as part of the room block is Thursday, April 8, 2021.

The 7th Annual Team Jack Foundation Gala was a fantastic event featuring ABC’s Amy Robach as the keynote speaker. The event was presented by Fat Brain Toys and raised $455,000 for childhood brain cancer research.  Click here for the 2020 Recap.