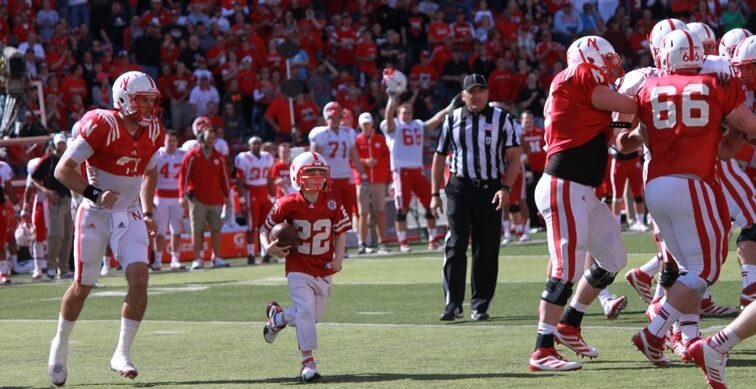 LINCOLN, Neb. — Late last October at Gillette Stadium, 12-year-old Jack Hoffman and his parents, Andy and Brianna, found themselves as guests on the New England Patriots’ sideline before kickoff against the Los Angeles Chargers. It was any kid’s dream, mingling among some of the biggest stars in sports.

So for whom did Jack first look, Brady or Gronk?

For good reason. Five years ago this spring, a friendship between Burkhead, then a Nebraska running back, and Jack led to a moment at the Cornhuskers’ Red-White game that made the youngster an overnight celebrity. His 69-yard touchdown run electrified Memorial Stadium and brought awareness nationally to pediatric brain cancer, with which Jack was diagnosed in May 2011 at age 5.

The run won an ESPY, earned Jack a meeting with President Barack Obama and landed him as the grand marshal in the 2013 Nebraska homecoming parade. It also launched a fundraising effort, boosted by the Hoffmans’ continued relationship with Burkhead and the Nebraska football program, that has enabled the Team Jack Foundation to raise more than $5 million for pediatric brain cancer research and treatment.

Last month, the foundation hosted its fifth annual gala for a crowd of 750 donors that featured more than two dozen current and former Nebraska players, including Burkhead, who recently completed his fifth NFL season and first with the Patriots.

In addition to its financial impact, the Team Jack Foundation provides support to dozens of families affected by pediatric brain cancer.

“I don’t think we ever envisioned this,” Burkhead said.

Jack, after enduring two surgeries in 2011 and two regimens of chemotherapy before his participation in a 13-month clinical trial when the tumor showed growth in August 2014, has remained off treatment since late in 2015.

He takes 14 pills a day to battle seizures caused by epilepsy, a secondary condition of the present-but-stable brain tumor. His next scan is scheduled for April at Boston Children’s Hospital, the site of Jack’s operations and previous treatment.

Jack attends sixth grade at West Holt Elementary in Atkinson, Nebraska. He plays basketball and baseball, though he’s currently sidelined by a fractured right tibia and fibula courtesy of a faulty playground swing. The cast comes off in May.

But you won’t hear any hint of a complaint from the Hoffmans about such normal, pre-teen mishaps.

“You live day to day when you have a kid with cancer,” Brianna said. “We have a lot of friends with kids who have brain tumors. And a lot of them aren’t doing as well as Jack. So we’re fortunate to be where we’re at right now. You’re thankful for every day that you’ve been given. We’re thankful for today.

“And we’re thankful for the opportunity to get the word out. There are a lot of kids with cancer. It’s technically a rare disease, but it’s not really rare — once you’re in it and you see how many people are affected by it.”

More than 4,600 children in the United States are diagnosed annually with brain cancer. It is the leading cause of cancer-related deaths among children. Still, Jack’s father said, funding lags for research and treatment.

That’s where Team Jack has accomplished its most meaningful work.

The foundation has given nearly $4 million to research, investing in six projects nationally. In 2015, Team Jack committed $1.5 million to create a dedicated program at the University of Nebraska Medical Center in Omaha. The Nebraska Legislature matched the pledge. And this summer, Dr. Jonathan Schwartz arrives from Michigan to begin work as the state’s first pediatric neuro-oncologist.

The Team Jack Foundation this year announced a donation of $500,000 in seed money to UNMC for the POWER5 initiative, a $5 million program to fund research, pain management and education for this cause.

And at the Team Jack Gala last month, Nebraska Athletic Director Bill Moos said the school would again in 2018 stage special events for pediatric brain cancer patients around a football game — the Sept. 28 visit to Lincoln from Purdue.

“Our goal was to take those blessings that we have in life and use that platform to raise awareness to a crisis in this country,” Andy said.

With Burkhead, the Hoffmans truly found a match made in heaven. He came to Nebraska in 2009 as a schoolboy legend out of Plano, Texas, the son of an FBI agent and a fourth-grade teacher. Burkhead left as a beloved figure and the fifth-leading rusher in school history.

“Growing up, my parents always preached to me to use my platform,” he said. “Giving back was a big thing.”

Teammates, coaches, even casual acquaintances gained a sense that Rex was destined for something larger than football. For former Nebraska receiver Kenny Bell, now with the Denver Broncos, that relationship with Jack crystallized the importance of Burkhead’s generous spirit.

“I think I can speak on a lot of guys’ behalf when you talk about what that meant to us,” Bell said. “It showed us as Rex’s teammates how to grow individually. We were all able to build on that moment and do things in our personal lives because of what Rex did for Jack.”

The Hoffmans found special significance in the timing of their first encounter with Burkhead in 2011 during a visit arranged by Nebraska. It came just days before Jack’s second brain surgery.

And when Burkhead signed last March with New England, it again marked a moment of deep meaning for the Hoffmans.

“We attribute Boston to saving our son’s life,” Andy said.

Burkhead plans his own fundraiser in Texas this year — he did it last year for the first time — to support Team Jack. When the Hoffmans attended in 2017, they stayed at the home of Burkhead’s parents, Rick and Robin.

“I think Jack says it best,” Brianna said. “If you ask him who his best friend is, he’ll say Rex. From the beginning, it’s almost like he was an angel.”

It’s no surprise, you see, that Jack and his parents, in that visit to Foxborough last season, looked right past the Patriots’ more famous names in search of Burkhead. In a season shortened to 10 games because of a knee injury, he scored eight touchdowns, doubling his career output.

You could say his focus shifts in the offseason, but that wouldn’t be exactly right. Team Jack and its mission never stray from the top of Burkhead’s priority list.

“The way the foundation has grown, how the awareness has grown, it’s unbelievable,” Burkhead said. “As for Jack, when we met, I just didn’t know how much longer he would have. So to see him now, getting tall and enjoying life and experiencing things, playing sports and being able to go to school, it’s very heartwarming.”