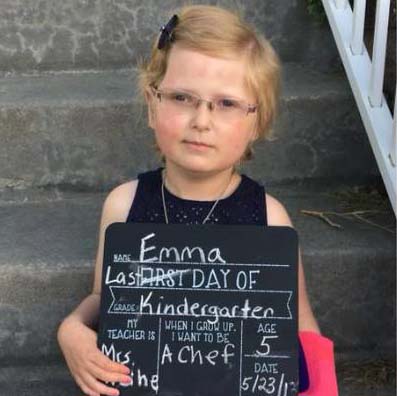 CURRENT STATUS: BECAME AN ANGEL IN 2020

Donate in Memory of Emma

In early 2013, when Emma Gehring was 7 months old, her parents began to notice issues with her development and our doctor ordered an MRI. On January 2, 2013, the results of the MRI revealed that Emma had a sizeable brain tumor called a pilomyxoid astrocytoma. Shortly after her diagnosis, the Hoffman family shared their experiences with the Gehring’s and helped them to get in touch with Boston Children’s Hospital. On January 15, 2013, Emma had her first surgery in Boston to resect the tumor.  Emma’s surgeons shared with the family that her tumor was not cancerous, but is fast growing; therefore, it would have to be treated with chemotherapy. During the first year and a half of her treatments, Emma was on three different chemotherapy regimens. Unfortunately, the chemotherapy regimens were unable to control the growth of the tumor and Emma fought hard and endured the side effects of the chemotherapy, yet the treatments be unsuccessful. As the tumor grew back, Emma suffered the loss of those skills she had fought so hard to gain back.

In August of 2014, Emma had a second surgery to resect her tumor. She endured inpatient stays at Madonna Rehabilitation Hospital and ongoing therapy to regain some of the motor skills and language development that had been compromised from the treatment and surgeries. After being off treatment for a year following her TPCV regimen and a series of stable scans, in March of 2017, Emma’s tumor again showed signs of growth. Over the next months, Emma endured chemo drugs changes due to side effects ranging from skin rashes to elevated liver enzymes, worked through ophthalmology challenges, as well as surgeries to correct, all with her sassy spirit evident. She had periods where she was off treatment and did well, followed by challenges relatable only to those parents of these tumor fighters.

In late 2019, she experienced neurological changes, and it was also confirmed that Emma had a stroke-like event caused by the tumor putting pressure on her carotid artery and impeding the blood flow to the blood vessels in the periphery of the left side of her brain. Emma’s doctor applied for compassionate use of TAK 580, a drug therapy that was in phase I of clinical trial which was approved in November that year.

Emma faced her battle with pediatric cancer with perseverance and grace and passed away peacefully on December 11, 2020. She inspired countless individuals with her strength and resilience and taught everyone what it means to be #EmmaStrong. Watching Emma’s strength as well as the strength of other children and families fighting this disease, the Gehring’s started the Emma Strong Foundation to help raise awareness and funding to find a cure for our kids.

To make a donation to fund child brain cancer research in memory of Emma and her fight, click the red donate button at the top of the page.