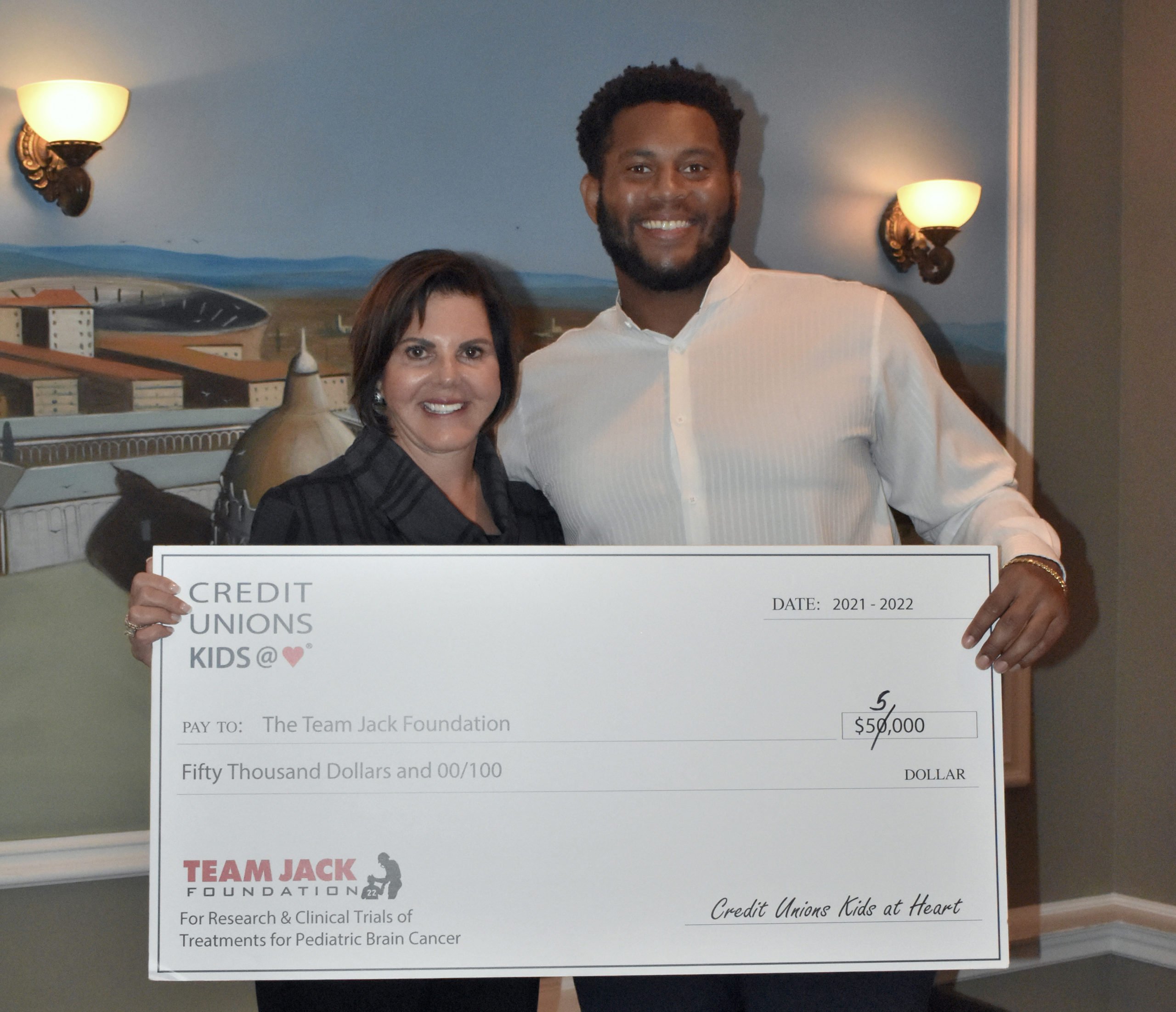 The Team Jack Foundation and Credit Union Kids at Heart have teamed up for the fourth year to fight childhood brain cancer research. Credit Union Kids at Heart is a Massachusetts-based nonprofit that is dedicated to funding research aimed at pediatric neurological diseases, including brain cancer.  The partnership began when Team Jack Board Member, Rex Burkhead, was the running back for the New England Patriots.

During the first three years, Burkhead served as the spokesman for the partnership for an initiative called “First Downs to Fight Pediatric Brain Cancer.”  With the help of the local Boston radio station, 98.5 The Sports Hub, this initiative resulted in a combined $110,000 for childhood brain cancer research at Dana-Farber Cancer Institute. Burkhead’s contract with the New England Patriots expired after the 2020-2021 NFL season, thus ending the connection to the New England area. Fortunately, Patriots offensive lineman Justin Herron, graciously stepped into this role to help raise awareness and research funds for the cause. This year, Credit Unions Kids at Heart, led by Jane Melchionda, contributed $100,000 to the Team Jack Foundation. These funds will be invested in Dr. Pratiti Bandopadhayhay’s project at Dana-Farber Cancer Institute, studying hidden drivers of pediatric low-grade glioma growth.

“Team Jack is a long-term champion in funding pediatric brain cancer research, which makes the Team Jack Foundation an excellent and like-minded partner for Credit Unions Kids at Heart. Because medical discovery is an ongoing process, we are encouraged by regular advancements in therapies and treatments—onwards toward a cure! We’ll pause when all affected children are able to lead healthy and happy lives.”  Jane Melchionda for Credit Unions Kids at Heart

The Team Jack Foundation is proud and honored to partner with Credit Unions Kids at Heart and New England Patriot Justin Herron. Not only does this partnership allow the Foundation to expand its fundraising efforts, but also helps bring national awareness to childhood brain cancer. A special thank you to Justin Herron and our friends at Credit Union Kids at Heart for standing by our side in the fight against childhood brain cancer!