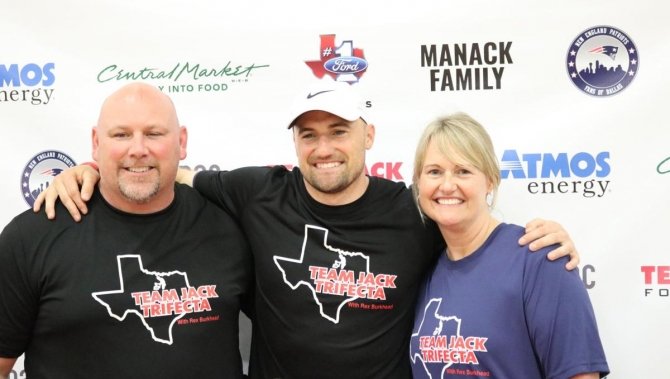 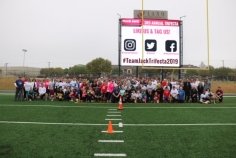 Not even a bout with Mother Nature could slow Plano Senior alum Rex Burkhead and the Team Jack Foundation from its most successful Team Jack Trifecta yet.

From the start of the three-sport fundraiser’s morning 5K fun run outside Plano’s Clark Stadium to the last bid submitted for the event’s national online auction Sunday evening, and all the festivities in between, Team Jack raised approximately $105,000 toward pediatric brain cancer research – a $40,000 increase from last year and a number plenty gratifying for the New England Patriots running back fresh off the fundraiser’s third installment.

“Everyone had a great time … and it’s so great seeing so many people continue to come back and bring more people with them,” Burkhead said. “It’s awesome to be a part of this.”

Getting there required some improvisation after inclement weather drenched the start of the youth football camp, held mid-morning at Clark on April 6. Moments after Burkhead led a crowd of kids through the stadium tunnel and onto the field for warm-up stretches, heavy rainfall forced a momentary delay as campers were shuttled into the locker rooms and equipment was loaded into trucks to be transported across the street to PSA2.

During the downtime, kids were kept entertained by the camp’s cast of college and professional football veterans – including several with local ties, like Plano alum and current Los Angeles Ram Joseph Noteboom, Allen alum and current Jacksonville Jaguar Cedric Obguehi and Plano West alums Jackson Jeffcoat and Ameen Behbahani – before the camp resumed on the PSA2 basketball courts.

“Ameen had everyone going and playing different games. Trust me, they weren’t bored at all,” Burkhead said. “… We couldn’t have done it without the volunteers and coaches. Everybody pitched in and transported all the equipment over [to PSA2], and we had to do some things a little different, but it was still a lot of fun.” 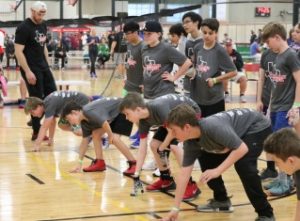 While nearly 200 campers rotated through a variety of instructional stations, drilling all manner of football fundamentals, spectators scoured the facility to bid on items up for auction, as well as sample vendor stations and even take pictures with the Vince Lombardi Trophy.

The NFL’s illustrious championship relic was on display at the Trifecta just over two months after Burkhead and the Patriots defeated the Rams, 13-3, in Super Bowl LIII – crowning the Plano alum an NFL champion for the first time in his six-year pro career.

“It’s something you dream about as a little kid and to get there and accomplish that with such a great team and a bunch of great guys, it really is a thrill,” Burkhead said.

Although Burkhead wound up contributing plenty to New England’s sixth title, getting there required overcoming an early-season neck injury that sidelined the former Wildcat for just over two months – the longest stretch of missed time during the running back’s career.

“It was just something that had to heal and it was definitely tough being out and not being around the guys,” Burkhead said. “I had never been out for that long, so you just have to stay focused and do what you can. The staff and trainers did a great job getting me back and in shape.”

Returning to a crowded backfield alongside standout rookie Sony Michel and versatile rusher James White, Burkhead was worked back into the fold as part of a running game that took on a greater workload throughout the postseason. The Patriots averaged 161.7 rushing yards per game during the playoffs – an average that was the NFL’s highest since 2012 and New England’s highest since 1976.

Burkhead was part of that three-headed monster, including scoring the final two touchdowns of the Patriots’ 37-31 road win over the Kansas City Chiefs in the AFC Championship Game on Jan. 20.

“That was great. It was such a big win and to do so in an environment like that, we knew it was going to be a tough game,” Burkhead said. “Just to know that you’re going to the Super Bowl after a win like that, especially in overtime, is the best feeling.”

Burkhead picked up where he left off in his second consecutive Super Bowl appearance, leading all players in yards per carry (6.1) and helping cement the Patriots’ victory late in the fourth quarter with one of the game’s signature plays – a 26-yard run that helped set up a Stephen Gostkowski field goal for a 10-point lead with 3:05 to play. 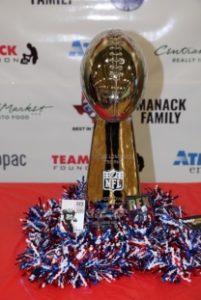 “I was just following our fullback, James Develin. Good things happen more times than not when you do,” Burkhead said. “I was just doing that, saw an opening and hit it as fast as I could. I could see their cornerback, Marcus Peters, coming in from my left side and I knew he was going to try and strip the ball, so I just got two hands on it and protected it as much as I could.”

Burkhead wasn’t the only Planoite on the field that early-February night in Atlanta, as Noteboom suited up for the Rams in the final game of his rookie season. The two were in tandem supporting a charitable cause two months later at the Team Jack Trifecta, with Burkhead adding to the lore of his alma mater as Plano Senior’s first-ever Super Bowl champion.

“There’s so much tradition here at Plano and it’s such a great program, so to be able to bring this back to my hometown with this event is really cool,” Burkhead said.