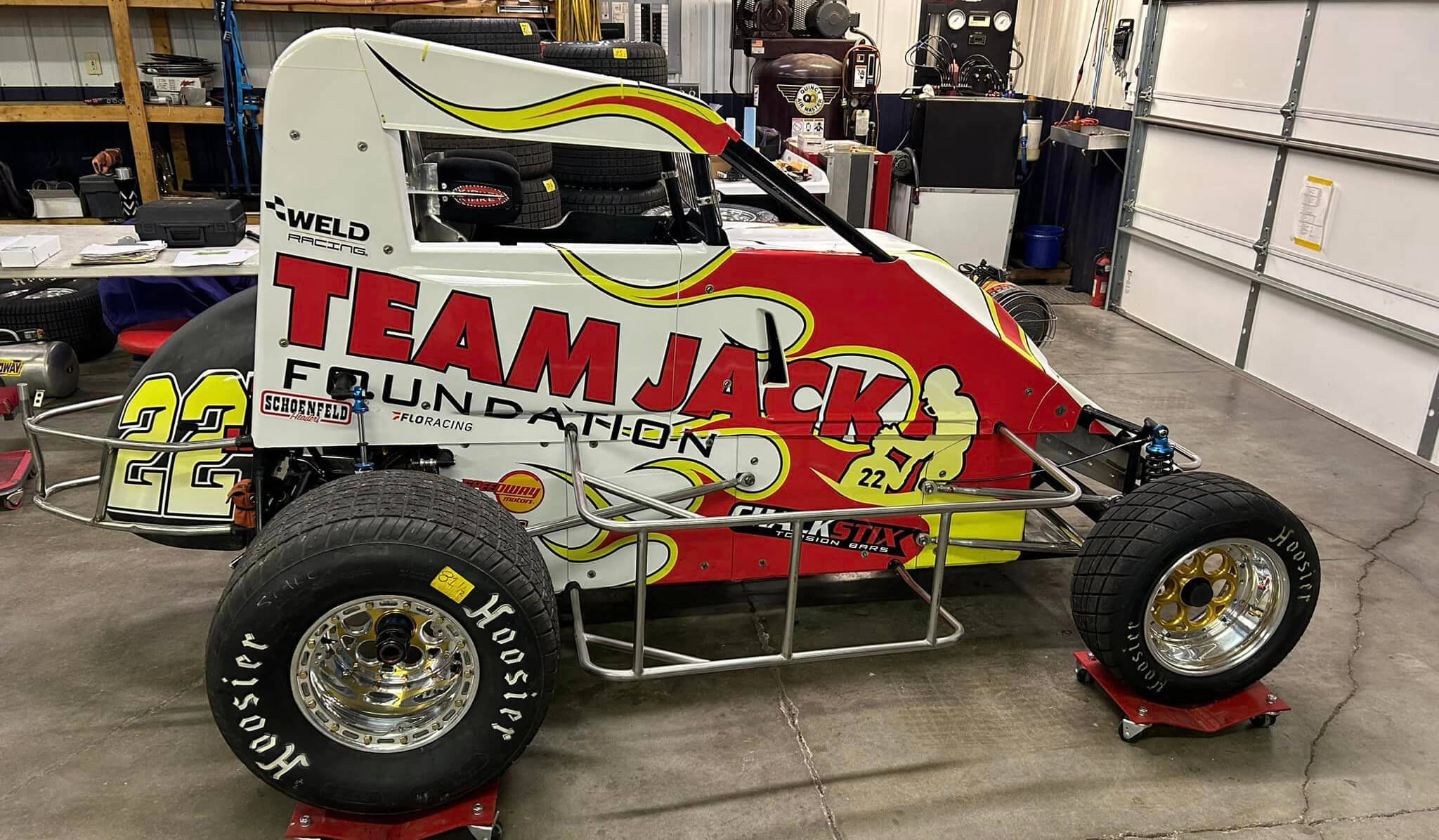 Chili Bowl Nationals – its name by itself conjures up all kinds of emotions and memories for race drivers throughout the world competing in what many feels is the most prestigious midget race of the year, representing all kinds of disciplines of racing. What started 36 years ago with 52 entries inside the Tulsa Expo Center, has grown to well over 350 entries.

The reasons for competing in the Lucas Oil Chili Bowl are as varied as the type of drivers strapping into their rocket ship. For some, it’s bragging rights or a friendly competition among rivals, to something to do in the winter to keep the reflexes sharp or test out the latest racing products, but everyone’s desire is to make it through the week-long racing with enough points to start in the final feature on Saturday night and end up in victory lane with the Golden Driller.

Mark Burch Motorsports knows how prestigious it is to earn one of the Golden Driller trophies and for the fourth year, shows up with some of the best equipment in the field, believing that they have the talent and equipment to win it all. But for his race team, Mark Burch’s intent just might be a bit different than most, as he intentionally looks for drivers that will be great team-mates to his long-time pilot and friend Don Droud Jr. and ambassadors for the Team Jack Foundation that he so proudly displays on his cars and passionately represents.

A philanthropist at heart, Mark Burch, long-time sprint car and midget owner, uses the Chili Bowl as a platform to get the awareness out and do some fundraising for Team Jack Foundation, a Nebraska non-profit that raises money to fund impactful childhood brain cancer research and works to create national awareness for the disease. Located in space 227, the team will be selling Team Jack merchandise and sweepstake entries for a 2022 Ford Bronco drawing, with proceeds to Team Jack.

“I attended a gala several years ago for Team Jack where I listened to research doctors explain that pediatric brain cancer research was grassroots and that while brain cancer is the number one cause of death for children with cancer, the research and funding is lacking,” Burch explains. “After meeting a young boy Jack Hoffman and his parents Andy Hoffman and wife Brianna at the gala, I quickly said there is nothing more grassroots then racing and it’s my God-given duty to leave a mark on the world. It’s about giving more than you take and I knew I had a platform with our race cars to help spread the word.”

Jack Hoffman’s story is quite amazing in itself as his dream as a young fella was to play football for the Nebraska Cornhuskers. But the devastation of the disease and the side effects of the chemo and radiation overshadowed the dream at times of playing ball. So, Team Jack Foundation made Hoffman’s dreams come true in 2013 as 8-year-old Jack got to run the field with his favorite running back Rex Burkhead and scored a 69-yard touchdown and that day Team Jack and its mission became front and center in the football community.

Team Jack Foundation Executive Director Kylie Dockter is blown away with the commitment that Mark Burch Motorsports has shown in such a short time to bring the mission front and center now in the racing community. “Mark has taken the charge to expose the racing community to our mission of finding treatments for pediatric brain cancer, and through his race teams competing on a national level and single handily creating fundraising drives and raffles like the 1973 Corvette that Burch and friends personally restored and donated to our Bronco sweepstakes, he has generated several hundreds of thousands of dollars in donations for Team Jack.”

Dockter goes on to explain the tragedy in pediatric brain cancer. Here are some alarming statistics that might blow you away:
• Each year, over 5,000 children are diagnosed with brain cancer. Of those children, nearly 30% will not survive.
• Childhood brain cancer is the No. 1 leading cancer cause of death in children in the United States.
• Less than 4% of the National Cancer Institute’s research investments are spent on childhood cancer, meaning even less is spent on pediatric brain cancer.
• First line chemotherapy for the most common form of child brain cancer has remained unchanged for over 30 years and is the same treatment for adults.
• 95% of children who survive cancer will have a significant health condition by age 45 as a direct result of toxicities from their treatment.

“The Chili Bowl environment is as much fun as it is competitive. The environment is fan friendly, allowing race fans to get up close and personal with their favorite teams and allows for an opportunity to share with race fans the heart behind their teams’ mission. “It’s important for us to have fun”, Burch says, “so the expectation for our drivers is to finish every lap and have a great time doing it.”

Burch is fielding three midgets this year with the return of Burch’s midget and sprint car driver Don Droud, Jr. who will race on Thursday night January 12th. As Ambassadors for Team Jack Foundation, Burch and Droud Jr. selected two drivers to complete their 3-car team this year, with Droud Jr. as driver development coach and wheel-man of the #22T.

Burch looks for drivers with great potential that have a heart for kids and gives back to their community who will represent Team Jack Foundation well and someone that deserves an opportunity in realizing their racing dreams, much like the little boy that wanted to play college football. 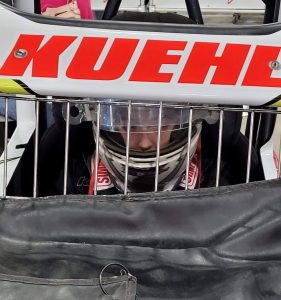 Kuehl comes into the Chili Bowl with the highlight of her career so far as she holds the rights to being the only female driver to start on the front row of the 2022 IMCA Boone Nationals Northern Sport Mod “big dance” after a week-long of racing against 172 drivers and to finish the 30 laps on the podium in fourth place.

Getting seat time in all types of cars is important to Kuehl, however being part of Team Jack Foundation and Mark Burch Motorsports is an honor. “Mark is so passionate about making a difference in those kids lives that after being part of Chili Bowl last year and learning more about Team Jack, I want to continue to use my racing, like Mark, to give back,” says Kuehl. “I learned a lot from Don about car setup and where to run the track and look forward to him helping me out again.”

Last year Kuehl was honored with being nominated by Hunting with Heroes to participate in the IMCA Salute to Veterans tour and her Rosie the Riveter retro scheme on showed up in victory lane during SportMod competition a few times in the season with the help of her main sponsors Karl Kustoms, Double A Roofing, A-1 Materials.

Kuehl is an Iowa transplant from Arizona, who recently became a licensed realtor and is putting plans together for the 2023 season to participate in both Sport Mod and Stock Car racing along with other opportunities that may come her way. For now, the focus is on Chili Bowl and finishing every lap and starting well into the alphabet soup for Saturday’s nationals. “We enjoyed working with Taylor a lot last year. She’s open to suggestions, easy on the equipment and she’s a lot of fun to have around,” Droud Jr. adds.

For the fourth year Droud Jr. returns with the team for the Chili Bowl. The duo of Burch and Droud Jr have been a force to be reckoned with in open wheel racing, both in the midgets and the sprint car. Droud Jr. held the record for seven years at Knoxville Raceway being the first driver to turn in a lap time under 15 seconds. Droud Jr. took after his father Droud Sr. and started racing at 16. He and Burch connected many years ago and built a deep friendship that they honor on and off the track. Droud Jr. has over 75 feature wins. “We don’t compete with any one series. We race when our schedules allow, which gives us flexibility to race where we want and to do other things that are important,” says Droud Jr.

New to the team this year is 33-year-old rookie midget driver Marcus Kennedy from Nebraska. Kennedy runs at several local Nebraska tracks in the Micro Sprints 600cc series in both winged and non-winged cars and takes after his father and uncle of having the racing bug, but diverted from the family stock car path to open wheel racing. “Without the support of Seer Heating & Cooling and 3 Points Tires, my family’s businesses, I would not have had this chance,” adds Kennedy. 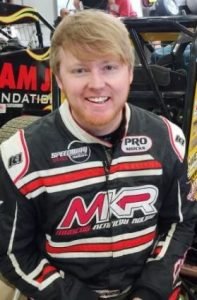 “I build the race shocks for Mark at Speedway Motors where I work and have built a great relationship with him over the years. There was talk of adding a third entry for Chili Bowl and I told Mark I was interested, and here we are,” adds Kennedy. “I had heard about Team Jack from Mark before but I really didn’t understand their mission of trying to raise awareness to get more research funds for kids with brain cancer. It’s sad that all the cancer funding that’s raised, very little goes to children’s causes”. “We’re excited to have Marcus on board with us this year. He’s willing to learn, is a grassroots racer and I wanted to give him a chance to live out his dream,” Burch adds.

Dreams do come true! You remember little Jack, the 7-year-old boy who had a dream of playing football even with a life sentence of brain cancer? He is 17-years-old and a junior in high school and plays football for the West Holt Huskies after multiple surgeries, toxic drugs and clinical trials. Sadly, his father Andy who started the foundation was diagnosed with brain cancer in 2020 and lost his battle in 2021 to this disease. While tragic, the Team Jack Foundation remains strong thanks to supporters and ambassadors like Burch and the Mark Burch Motorsports who continues to partner with their supports and drivers who are passionate about getting the word out about Team Jack.

“The racing community has had some of the most generous people I know and they have the most loyal fans who are the best people to work side-by-side with. I am forever grateful for their support and generosity,” Burch closes.