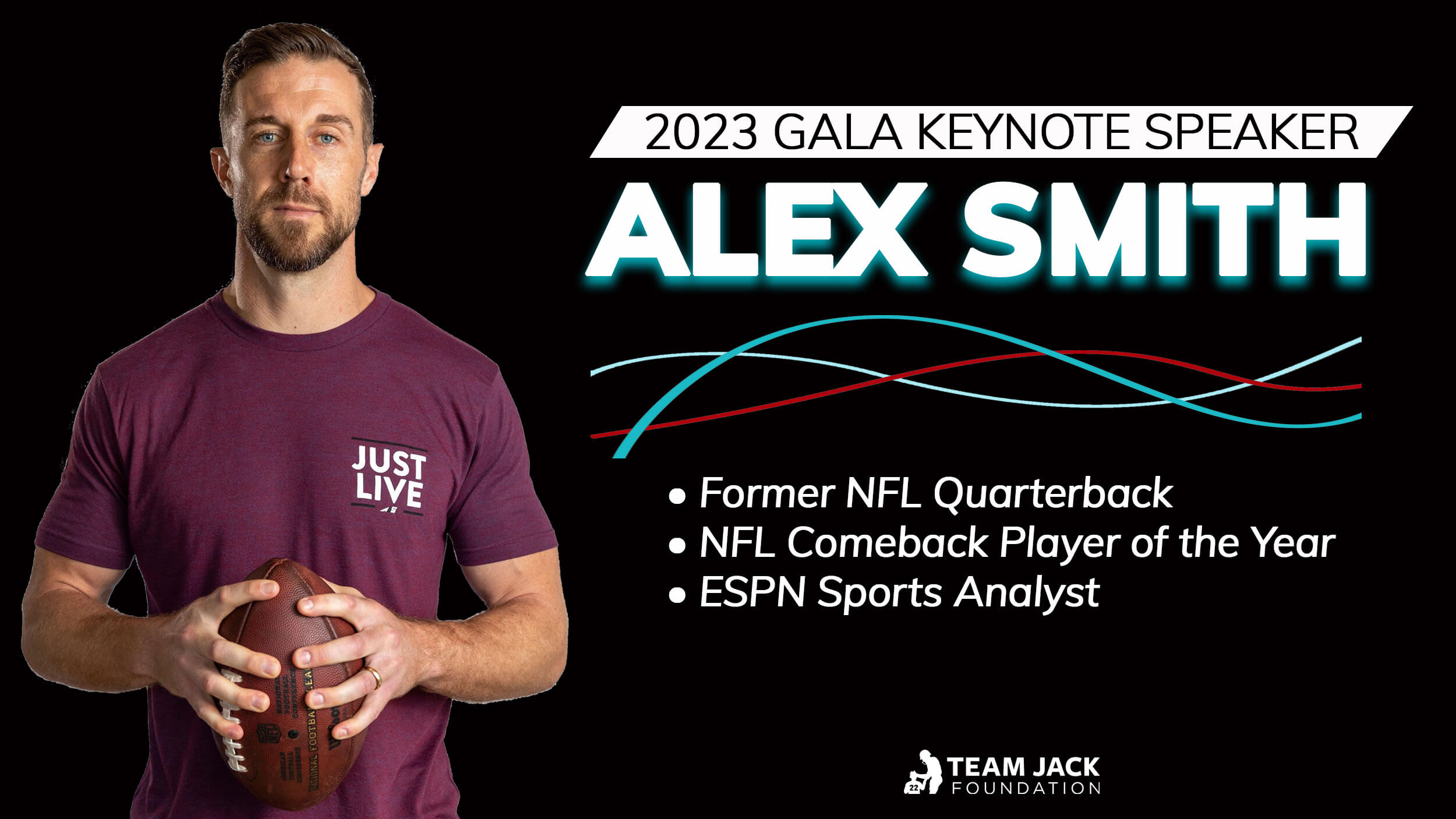 Lincoln, Nebr. – The Team Jack Foundation will hold its 10th Annual Gala presented by Fat Brain Toys on Saturday, February 25, 2023, in Lincoln, Nebraska. This year’s gala speaker will be former NFL Quarterback, 2020 Comeback Player of the Year, and ESPN Sports Analyst, Alex Smith. All proceeds from the event will benefit childhood brain cancer research. For information on how to attend the Gala, click here.

There is no better model for perseverance than Alex Smith. After suffering a life-threatening injury to his right leg that nearly resulted in amputation, Smith’s return to the field is regarded as one of the most iconic moments in football history.  Smith would complete his comeback in October of the 2020 season and go on to appear in eight games. His determination and success earned him the NFL Comeback Player of the Year honor. Smith retired from the NFL in April of 2021 after an incredible 16-year career, which began when he was selected by the San Francisco 49ers with the number one overall draft pick in 2005.

Since retiring from football, Smith has shown no signs of slowing down as he recently joined ESPN’s roster of on-air talent to contribute his expertise throughout the NFL season. Smith currently has a role on Monday Night Countdown on select weeks and contributes to Sunday NFL Countdown.

Off the field, Smith is a dedicated husband, father, and philanthropist as he founded The Alex Smith Foundation, which provides foster teens with the tools and resources needed to transition to successful adulthood.  Smith and his wife, Elizabeth, live in northern California with their three children.  In June 2022, Smith announced via social media that his six-year-old daughter was diagnosed with a large, malignant brain tumor and needed an emergency craniotomy.  After a 10-hour procedure, doctors were able to remove 100 percent of the tumor.

In addition to Smith, the event will be emceed, for the fourth year, by NASCAR Announcer, Rick Allen. This inspiring program will raise funds for childhood brain cancer research to discover safer, more effective treatments for children afflicted with the disease. The Team Jack Gala brings together supporters of the Foundation’s mission, and over the past nine years, over $4 million has been raised for research at the event.

To become a sponsor or to purchase event tickets, visit: https://www.teamjackfoundation.org/gala.