After turn as ‘pop star’ and singer, Lincoln Southwest grad ready to make mark in business 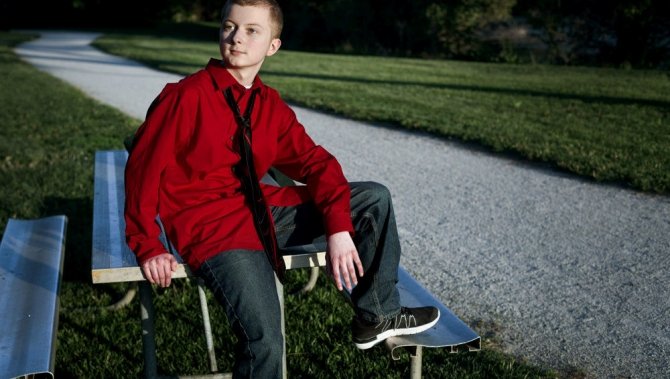 If you thought Cayden Hubbard peaked in fifth grade, when he walked out of Maxey Elementary School to a throng of fans, flew to L.A. and hung out with members of the band Maroon 5, you weren’t paying attention.

If you knew the Make-A-Wish “pop star for a day” event that sent him to California raised his local celebrity status enough that he performed at several of the organization’s galas as a middle school kid — including the national banquet in Arizona — and thought that was it, think again.

Surrounded by bodyguards and adoring fans, 11-year-old Cayden Hubbard walks the red carpet from Maxey Elementary School to a limo in December 2012 before his flight to Los Angeles, thanks to the Make-A-Wish Foundation of Nebraska. 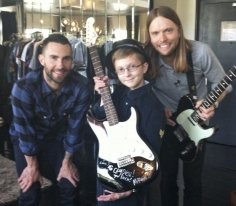 Because, Sunday, the 17-year-old will graduate from Southwest High School, a feat he accomplished in three years despite surgery this year for a brain tumor that’s been a part of his life since he was 6.

Doctors found the tumor when he was in kindergarten, and he’s had six surgeries since then — sometimes to insert ports for chemotherapy or to take them out, some on the tumor itself. But that wasn’t his main thing.

His main thing was school and being a kid and jamming on his guitar in his room, often with his uncle. He started at Southwest in 2015, spent a semester at The Career Academy and got involved with Junior Achievement, including participating in the group’s stock market challenge.

The tumor had been stable for some time, but after his sophomore year, it began growing again, said his mom, Jennifer Hubbard. He had surgery in Omaha in February.

Doctors wanted him to do inpatient treatment at Madonna Rehabilitation Center for two weeks, followed by six weeks of daytime rehabilitation — living at home but spending a bulk of his days at Madonna.

A teacher came to his home to work with him and coordinate with teachers at Southwest, and he could do much of his work online.

Inpatient therapy was hard, because they hadn’t been expecting it, she said, but eventually Cayden saw a silver lining. Like always.

“I used to look at (my tumor) as a barrier and something I need to get past,” he said. “But I also look at it as an opportunity.”

Case in point: Not actually being in school every day meant he had to learn to budget his time and get work done on his own.

“It’s helping me prepare for college,” he said.

He decided to graduate a year early because he’d earned enough credits, and he’s ready to get on with it.

“I’ve always been a person who sees the task in front of me, and if I don’t get it done, I will be anxious to get it done.”

He’s ready to move on to the next task: probably business administration, he said, because he’s an entrepreneur at heart. He thinks he’ll start at Southeast Community College.