Jack Hoffman was born on September 26, 2005, and he currently lives in Atkinson, Nebraska (pop. 1,100). He has been a Cornhusker football fan his entire life. In 2010, for Jack’s 5th birthday, his parents took him to his first Husker game. His Mom and Dad (Bri & Andy*) purchased a Rex Burkhead No. 22 jersey for him, for the game. Jack is no different than any other little boy growing up in the great state of Nebraska–he loves to play sports, ride bike, fish, hunt, and watch Cornhusker football.

About the Team Jack Foundation & Their Mission to Find a Cure

Fatefully, on April 22, 2011, Jack was life-flighted to Children’s Hospital in Omaha after suffering a life threatening seizure. A subsequent MRI showed a mass in the left temporal lobe of his brain. On May 20, 2011, Jack underwent surgery for the removal of a brain tumor next to his brain stem. Only a small amount of the tumor could be removed. The remaining tumor was declared inoperable. Throughout the spring, summer, and fall months of 2011, Jack battled the onset of Secondary Epilepsy–a condition brought on by the tumor. During this time, Jack suffered frequent partial seizures, sometimes up to eleven per day. The seizures persisted despite high dosages of two anti-seizure medications.

Specialists at Children’s Hospital in Boston were consulted in August 2011. Pediatric Neurosurgeon Liliana Goumnerova indicated that she felt she could safely resect the remaining tumor, and at the same time, achieve seizure relief by using intraoperative electrocorticography. Jack’s 2nd brain surgery in 5 months occurred in Boston on October 10, 2011. The surgery went well, as Dr. Goumnerova removed a golf ball sized tumor. Approximately 95% of the tumor was removed, with the exception of a small spot near the brain stem and cerebral artery. Another result of this surgery was the fact that Jack was made seizure free, as well. Unfortunately, soon after surgery, the remaining “spot” grew aggressively. Chemotherapy was then commenced.

“Before the second life-threatening brain surgery, the family reached out to the University of Nebraska to see if Jack could meet Rex Burkhead before his surgery.”

Before the second life-threatening brain surgery, the family reached out to the University of Nebraska to see if Jack could meet Rex Burkhead before his surgery. As a result, the University extended an invitation to Jack and his family to make the 4 hour drive to the Stadium. During this September 2011 visit, Rex spent several hours with Jack and his family—giving them a tour, having lunch together, and just hanging out. This one experience evolved into a remarkable friendship between a 6-year old boy and a major college football player. During the 2011 campaign, Rex wore a wristband that said: “Team Jack-Pray.” Rex’s support landed him the Rare Disease Champion Award presented by Uplifting Athletes. Rex’s benevolence has helped place pediatric brain cancer on the national agenda.

Because of the relationship between Jack and Rex and the entire Nebraska Football team, an opportunity of a lifetime was presented to Jack the day before the 2013 Nebraska spring game. The Huskers wanted Jack to score a touchdown in the spring game. After preparations by Jack and his family as well as the Husker football team, Jack entered the game and took the handoff from Taylor Martinez. He then went on to score a 69-yard touchdown, which resulted in a bench-clearing frenzy in the end zone around Jack. “The Run” earned Jack a 2013 ESPY Award for Best Moment in Sports and the video of Jack’s run now has nearly 9 million views on YouTube. This experience was unforgettable for Jack and his family, but raised significant awareness for childhood brain cancer world-wide.

“The Run” Seen Across the Nation

Jack’s Mom and Dad* were determined to help find an effective cure for pediatric brain cancer. As a result they partnered with CureSearch for Children’s Cancer, a national non-profit foundation which funds children’s cancer research. In 2012 and winter of 2013, the family was raising money for the “Team Jack Legacy Fund,” a designated CureSearch research fund they created. At the start of 2013, the family took another step, and with the help of friends and colleagues, they formed the “Team Jack Foundation.” All money raised through the Team Jack Foundation supports pediatric brain cancer research.

Jack is currently on treatment after his tumor started growing again in 2018. His brain tumor has a genetic mutation that can be treated with targeted drugs through a clinical trial. Jack travels to Boston every three months for medications and monitoring, which includes an MRI, ECHO, EKG, x-rays, lab work and an eye exam. These tests monitor the drugs’ effectiveness as well as for side effects. He is tolerating this treatment well and it has kept his brain tumor stable, which means not growing. They remain thankful for stable MRIs, as this is the dream for any brain tumor parent.

Jack continues to deal with epilepsy. He is on two anti-seizure medications, but he still has infrequent complex partial seizures. His providers continue to try to balance seizure control with functionality. These medications also have side effects. Jack takes 22 pills each day and is not able to do all the things his peers can (like drive a car), but he does not complain. He is thankful for all the things he can do. 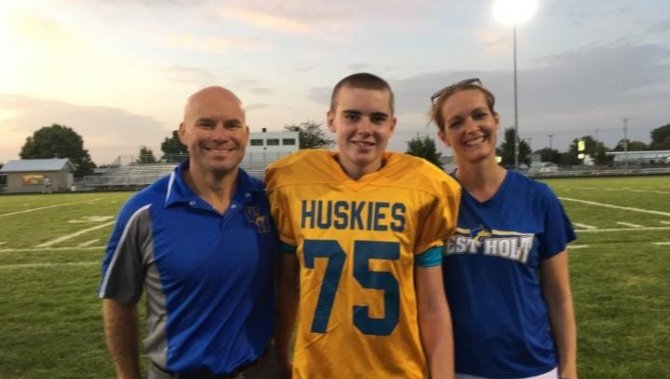 In the fall of 2019, after consultation with his physicians, Jack was able to join his junior high football team, the West Holt Huskies. Wearing the same number (75) as his father and four other Hoffman’s before him, his first snaps as center were emotional and monumental on his path to live a like a regular teenager. In 2022, Jack is a junior in high school, is still on a clinical trial for his brain tumor, and plays football for West Holt. Jack’s family has taken his diagnosis and worked to make a change for future families affected by child brain cancer.

* Tragically, Jack’s dad, Andy Hoffman, was diagnosed with brain cancer (glioblastoma) in July of 2020. He battled for seven months before passing away from the disease. The Team Jack Foundation is committed to upholding Andy’s legacy by working harder than ever
to fund the cure for childhood brain cancer.