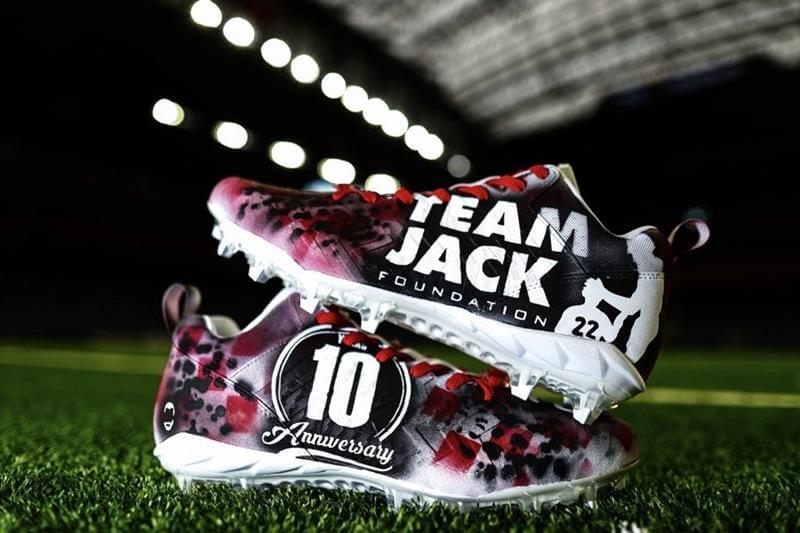 My Cause My Cleats is the National Football League’s program to allow athletes to represent a charitable cause of their choice. This initiative was sparked by the use of custom cleats across the league in pink to promote Breast Cancer Awareness and in camouflage and Salute to Service. Beginning in the 2016 NFL season and each year since, during Week 13 games, the players sport their custom cleats raising awareness for a wide array of nonprofits.

In the past, Team Jack Foundation has been honored to be chosen by Rex Burkhead, Ameer Abdullah, and Brent Qvale. Following Week 13, the cleats are sold either via the NFL Online Auction website or by an alternate avenue chosen by the athlete, with profits going toward their selected charity. 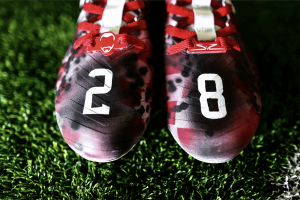 This year, two NFL players will represent Team Jack: Rex Burkhead, running back for the Houston Texans, who has represented Team Jack with his cleats since 2016, and JoJo Domann, linebacker for the Indianapolis Colts. Burkhead’s cleats this year celebrate the 10th Anniversary of the Team Jack Foundation. Rex’s cleats will be on display when the Texans take on the Cleveland Browns on Sunday. Domann will lace up his cleats to face the Cowboys under the lights in Dallas on Sunday Night Football. Stay tuned for an announcement with the auction listings for both pairs of cleats.

Rex Burkhead and JoJo Domann are both former Nebraska Football players. Burkhead was a Cornhusker from 2009 – 2012 and Domann from 2016-2021. This season is Burkhead’s tenth NFL season while Domann is in his rookie season.

Burkhead’s support of Team Jack dates back to prior to the inception of the Foundation when he befriended Team Jack’s namesake, Jack Hoffman, and his family. Rex has remained close to the Hoffman family, is a member of the Team Jack Foundation’s Board of Directors, and continues to be an active advocate, fundraiser, and supporter of the cause.

“I’m honored to represent the Team Jack Foundation for “My Cause, My Cleats” week in the NFL. It’s been a privilege to be a part of Team Jack the past ten years, as shown in the cleats design, and look forward to once again raising awareness for pediatric brain cancer research.” -Rex Burkhead 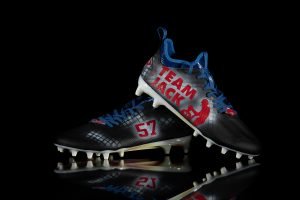 Domann supported the Foundation through the annual Nebraska Football Road Race held each summer to benefit the Childhood Brain Tumor Program at Children’s Hospital & Medical Center and UNMC in Omaha. He also partnered with Edgewater Insurance + Real Estate in his senior season in an effort called The Husker Heartbeat Giveback. This initiative supported thirteen charities chosen by Domann, one each week, during the Nebraska season, one of which was the Team Jack Foundation.

Domann said, “I’m looking forward to repping Team Jack on my cleats this year. I don’t see it (Team Jack) being a relationship that I had just at Nebraska. I saw Nebraska as a door to working with Team Jack and raising awareness for pediatric brain cancer for a lifetime. I’m thankful that Team 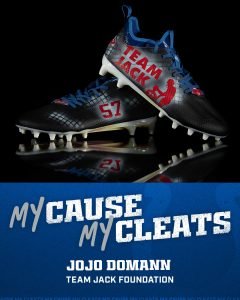 Jack does what they do and has devoted so much time and energy to make a difference, and I’m just fortunate to be a part of it.”

“Over the past seven years, My Cause My Cleats has been a great opportunity for foundations like ours. Part of our mission is to raise awareness for childhood brain cancer and this initiative does just that. To fulfill the other half of our mission, which is to raise impactful research dollars for the disease, this starts with raising awareness. We cannot thank these athletes enough for choosing to represent Team Jack with their cleats. They truly understand what it means to use their national platform for more than football,” said Kylie Dockter, Executive Director of the Team Jack Foundation.