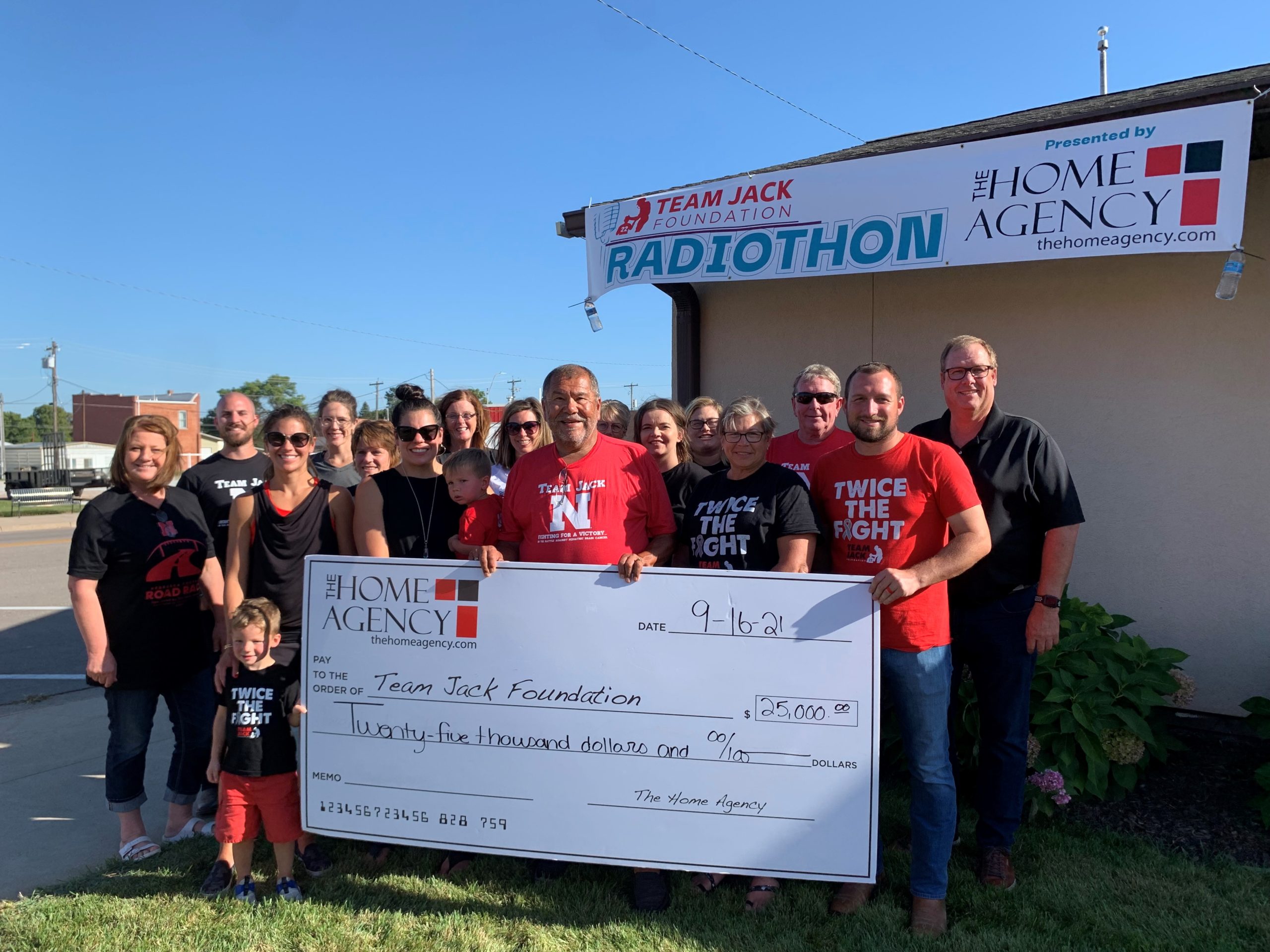 On a crisp September morning, volunteers and Team Jack staff gathered under a large, branded Team Jack tent, generously donated by Paulsen, Inc., pitched in the yard of The Home Agency offices in Elwood, NE ready for the 9th Annual Radiothon to get underway. Promptly at 7:00 AM, with the support of the Huskers Radio Network, our host, Kevin Thomas took the microphone and began to tell our story. And the phones began to ring. 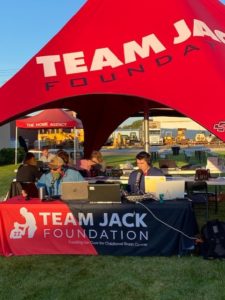 For the next 13 hours, there were celebrity interviews and family stories explaining the mission of Team Jack and how critical funding impactful research is to move toward a cure. Like the story of 6-year-old Terry LaFore, who was diagnosed with a brain tumor and passed within six months, all since the airing of the radiothon in the fall of 2020. Dr. Sidharth Mahapatra, a principal investigator, and internist from UNMC, spoke about how Team Jack is an important partner in the pursuit of gentler, more targeted therapies for young tumor fighters. Rex Burkhead, Dr. Tom Osborne, Dick Vitale, Jeremiah Sirles, Kenny Bell, Olympian Jordan Larson, Larry the Cable Guy and state leaders, Governor Pete Ricketts and Senator Deb Fischer.

One of the highlights of the day was when students from Elwood preschool marched over, chanting “Go Big Red,” wearing their “Twice the Fight” t-shirts purchased for them by Shari and Jim 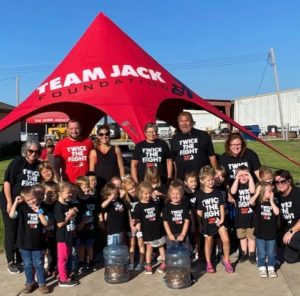 Baldonado. They brought two wagons carrying huge water jugs filled with the pennies and change they had collected over the last month. They contained nearly $300 which they donated to Team Jack!

“This was the third year we have hosted this event at our offices in Elwood, and I have to say I am so proud of the way Elwood, Lexington, Cozad, and the surrounding communities have stepped up to make the Radiothon such a success,” said Home Agency President Jim Baldonado. “Andy Hoffman worked so hard establishing the profile of Team Jack in this state, and we are happy that we can help elevate the awareness through this event. Every dollar raised will help the kids in Nebraska get the top-notch care they deserve through the efforts of Team Jack.”

Although the event was missing our Co-Founder, the late Andy Hoffman, who lost his own battle with a brain tumor earlier this year, his presence was certainly felt through the motivation and determination of our volunteers and the Team Jack staff. In the early days, Andy knew the Radiothon would be a great way to spread awareness about the mission of Team Jack and that continues today.

Applied Connective Technologies of Albion powered the programming as well as the phone lines for the ninth straight year. They also were hourly prize sponsors for several of the hours during the event as their generous support of Team Jack continues. The Husker Radio Network also provided the plug-in to all the stations on their network and is a special partner to Team Jack.

Our presenting sponsor, The Home Agency, led the charge for an additional fundraiser within the Radiothon again this year. They underwrote a $25,000 raffle prize. We sold 42 available $1,000 raffle tickets during the broadcast, and the winner was announced during the show. Ron Leifert from Lincoln, Nebr. was the lucky winner!

Since the sun rose over Elwood on September 16, Team Jack has raised nearly $145,000 and counting from the 9th Annual Radiothon. Be sure to tune in next year on September 29, 2022, when we celebrate our 10th anniversary of the Team Jack Foundation and Radiothon!