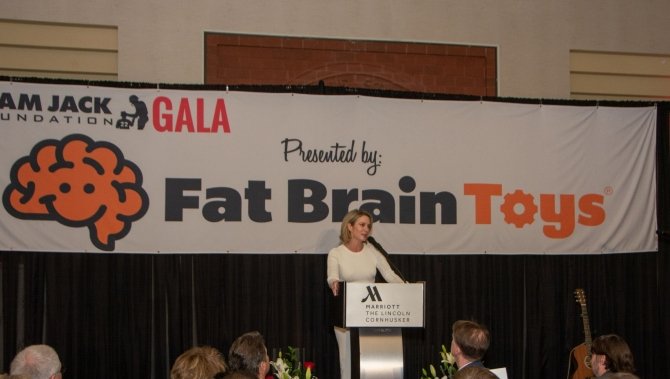 Keynote Address: Amy Robach of ABC News’ 20/20 and Good Morning America delivered the keynote. She shared her journey with breast cancer and about when she was deciding whether to do the on-air mammogram to promote October as National Breast Cancer Awareness Month, Robyn Roberts told her that she might save a life. She went ahead and did the mammogram and it ended up being her own life that she saved, as she learned of her breast cancer diagnosis as a result of the mammogram. Robach quoted a famous Charlie Brown cartoon, “We only live once, Snoopy”, said Charlie Brown, to which Snoopy answered, “Wrong! We only die once. We live every day!”

Some of the children affected with brain cancer with former Huskers. 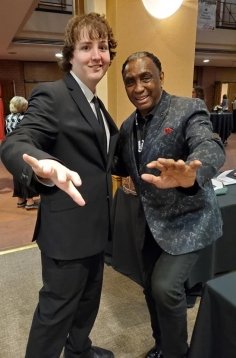 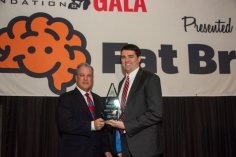 Dan Campbell of NCR presenting the 2019 Teammate of the Year Award to Cody Thomas.

Families’ Stories Shared: Of those in attendance were over 20 families that have been affected by the disease, two of whom shared their stories with the crowd. The first family was the Bill and Jodi Simants family of North Platte, NE. The Simants’ 11-year old son, Grady, was the Spotlight Story sponsored by The Home Agency and the Jim and Sharri Baldonado family. Grady was diagnosed in 2015, underwent surgery, received treatment and then was considered cancer free until September of 2018 when they learned that his cancer had returned. After traveling to St. Jude’s in Memphis, Tennessee countless times, they are currently looking for another treatment option as his last clinical trial failed. “St. Jude’s is amazing, but we want to be close to home, where our support system is, to fight this fight,” said Jodi Simants.

The Brent and Kathryn Gehring family was the second family that shared their story. Their daughter, Emma, was diagnosed at age 7 months and is now 7 years old and still battling. Late in 2019, after several months on a new trial drug called TAK580, which was funded by Team Jack, Emma took a terrible turn which had her fighting for her life. Brent Gehring explained, “the tumor was dying, because of TAK580. The problem with medicine and the reason we can’t give up and we can’t quit is the tumor was dying too fast. And because it was shrinking too fast, it was bleeding which caused the seizures.” Emma is currently receiving inpatient rehabilitative services to try to regain much of what she lost during that time including her sight and her ability to sit up and to talk.

The stories of families such as the Gerhings and the Simants are why the Team Jack Foundation continues to work to fund groundbreaking research and raise awareness the for the disease, the leading childhood cancer cause of death.

Auctions: The live auction powered by Proxibid featured 14 items including a pair of Super Bowl Champion Patrick Mahomes’ Kansas City Chiefs jerseys, a Napa Valley Wine Trip and dinner for eight with Nebraska’s Governor, Pete Ricketts. Glass Solutions, Inc and Glass Solutions Foundation out of Itasca, Illinois was the Silent Auction Sponsor this year. Over 130 items were offered to bidders ranging from experience packages to autographed memorabilia and beyond. Guests took the inspiration and ran with it as the two auctions together totaled over $100,000 raised!

Special Guests: Some of the special guests in attendance were Rex Burkhead, Jeremiah Sirles, Kenny Bell, Brent Qvale, Matt Slauson, Johnny Rodgers, and Joba Chamberlain as well as Nebraska Athletic Director, Bill Moos and his wife Kendra. A special highlight each year at the Gala is the bonding that occurs between the families affected by child brain cancer and the former Husker athletes as well as just among the families themselves. 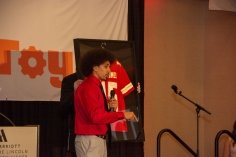 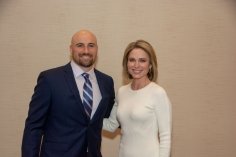 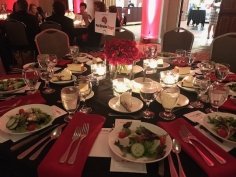 One of the teammate tables at the 2020 Team Jack Gala.

About Team Jack Foundation: In seven years of the annual Team Jack Gala, nearly $3 million has been raised for research. With these funds and the others raised since 2013, the Team Jack Foundation has funded impactful national research with an additional focus to build a Brain Tumor program in Omaha, NE. The purpose of this program is to give regional children with brain cancer, like Grady and Emma, access to the best care possible yet remain close to home.