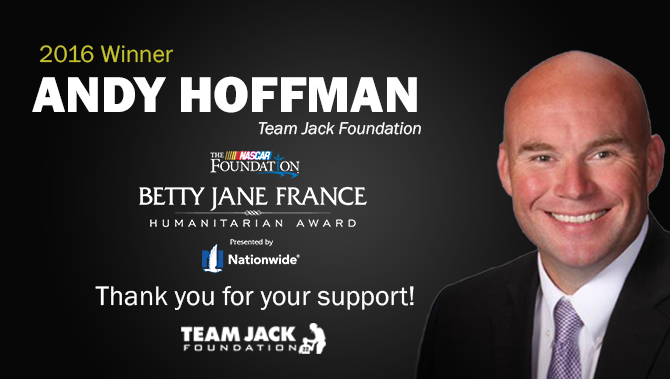 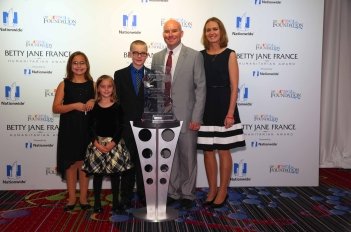 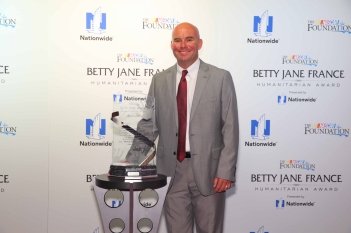 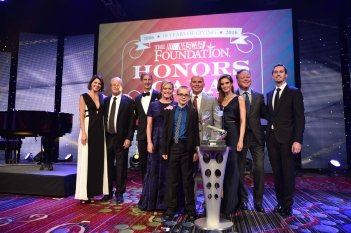 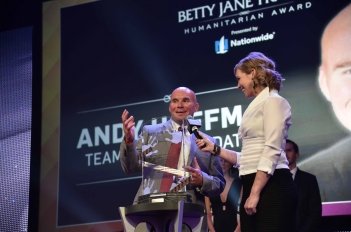 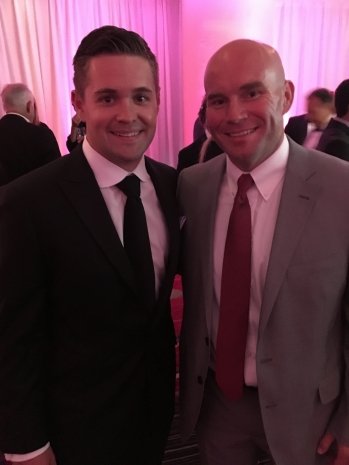 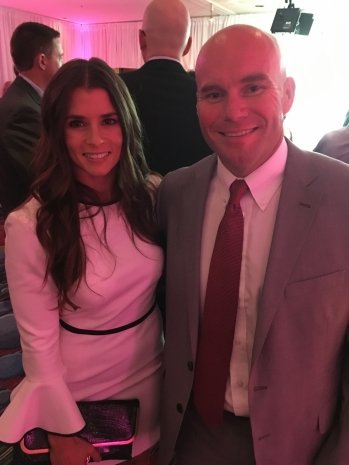 After two months of online voting, Hoffman will receive $100,000 for his charity, the Team Jack Foundation

Atkinson, Nebr. (October 3, 2016)—Co-founder of the Team Jack Foundation, Andy Hoffman, has been named the 2016 winner of The NASCAR Foundation’s prestigious Betty Jane France Humanitarian Award presented by Nationwide for his philanthropic efforts to find a cure for childhood brain cancer.

Hoffman was among four finalists from across the nation up for the award. This award honors a NASCAR fan who has positively impacted the lives of children through volunteerism. After two months of online fan voting on NASCAR.com, Hoffman emerged from the group of selected finalists. The voting ended Monday night; the annual award was presented on Tuesday night during The NASCAR Foundation’s Inaugural Honors Gala held at New York City Times Square.

Over the past six years, The NASCAR Foundation has awarded $875,000 to the charities in honor of twenty remarkable finalists, with almost 200,000 children positively impacted.

Hoffman will receive a $100,000 donation from The NASCAR Foundation for the charity he represents, the Team Jack Foundation. Team Jack was founded by Hoffman and his wife, Brianna, in 2013 after their son, Jack, was diagnosed with a brain tumor. Team Jack works to raise research funds and create national awareness of pediatric brain cancer.

“Receiving this award is truly a reflection of all of those amazing people that helped support the Team Jack Foundation since day one,” Hoffman said. “Winning this award, literally, could be the difference between life or death for a child someday. Our hope is that the $100,000 donation will provide the seed money for us to help fund yet another clinical trial.”
The three other finalists, who each received $25,000 from The NASCAR Foundation, were: Jim Giaccone of Bayville, New York, representing the New York-based Tuesday’s Children organization; Logan Houptley of Bethlehem, Pennsylvania, a founding member of the Mikayla’s Voice organization in Nazareth, Pennsylvania; and Parker White of Greensboro, North Carolina, founder of BackPack Beginnings.
“Andy is a deserving award winner and the Team Jack Foundation a deserving beneficiary of our $100,000 donation,” said Mike Helton, chairman of The NASCAR Foundation and NASCAR’s vice chairman. “The story of the Team Jack Foundation is emotional and inspiring. Tonight’s presentation continues the high standards of the Betty Jane France Humanitarian Award and honors the memory of Betty Jane France.”

Andy and his wife, Brianna, have lead efforts in establishing the Team Jack Foundation and have helped raise over $3 million for pediatric brain cancer research. Hoffman has helped turn his family’s nightmare into a powerful force impacting the lives of children and their families. His passion for fighting pediatric brain cancer is unprecedented. From investing personal resources to volunteering countless hours each year, the Hoffmans are helping lead the country in the fight against the number one cancer cause of death in children.

Introducing Hoffman at the NASCAR Foundation Honors Gala on Tuesday night was Martin Truex Jr., who is currently in first place in the Sprint Cup NASCAR Chase Standings. Truex has his own foundation and has created similar goals as far as developing new, pediatric-centric cancer treatments.

“It’s amazing,” Truex said about Hoffman in an interview with ESPN. “It’s an unbelievable story and his commitment is incredible.”
Since the Foundation’s inception in January 2013, it has funded five research projects nationally. Recently, Hoffman helped successfully lobby for a $3 million pediatric brain tumor program at Nebraska’s Fred and Pamela Buffett Cancer Center, $1.5 million of which is matched by the Team Jack Foundation. This groundbreaking program will help Nebraska’s brain tumor children receive better treatment and affordable access to national clinical trials.

Today, the Foundation is comprised of three staff members, an eight person board of directors as well as a scientific advisory board. The Foundation continues to be powered by generous volunteers all across Nebraska for various projects and events.

“Receiving this award is truly a reflection of all of those amazing people that helped support the Team Jack Foundation since day one. Winning this award, literally, could be the difference between life or death for a child,” Hoffman said. “This movement could not have happened anywhere else in the country except Nebraska.”

About the Team Jack Foundation

About The NASCAR Foundation

The National Association for Stock Car Auto Racing Inc. (NASCAR) established The NASCAR Foundation in January 2006 to support initiatives that positively affect the lives of children throughout the United States. The 501(c) (3) non-profit entity partners with medical experts and other charitable organizations to fund children’s health care programs. Now celebrating 10 Years of Giving in 2016, The NASCAR Foundation has cumulatively donated $25 million to reach more than one million children. For more information on The NASCAR Foundation, please visit: NASCARfoundation.org. Follow The NASCAR Foundation on Facebook at www.Facebook.com/NASCARFoundation or on Twitter: @NASCAR_FDN.